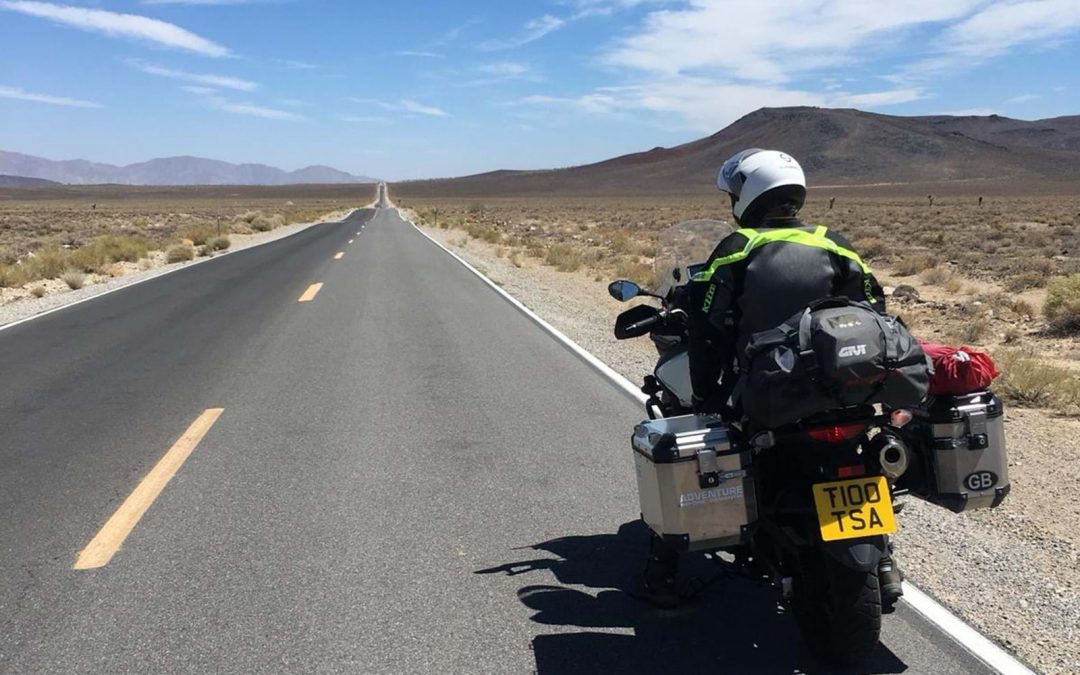 14 months and 37,000 miles on his 2013 Suzuki V-Strom 650, the result of Tim and his wife leaving their jobs behind and seeing the world while they could still get their leg over a bike.

On the day of their wedding anniversary Tim and his wife headed to New York where they were met by their VStrom 650. This was where this momentous journey would start.

Tim said “When I told friends what we were planning, everyone assumed we would be on a BMW, especially as I had been a dealer for 18 years. However, the cost and complexity of some modern bikes and my budget had steered me in a different direction, and after having 3 trouble free years on a 1000 V Strom I traded down to the 650 which was lighter. It was comfortable with good economy giving a range of 260 miles per tankful. Those last two things are far more important than many realise. I changed the plastic panniers for aluminium ones and added crash bars and a bash plate.”

From New York the couple travelled north to Canada for a family wedding and then back through America. Here, they would managed to rack up an impressive 7600 miles. Stopping at Lincoln City, Crooked River Ranch, Carson City, the ghost town of Bodie, Nappa Valley, a sweltering 51 degree Death Valley and Las Vegas where they saw Stevie Wonder in concert! Finally, Tim and his wife travelled a part of Route 66 and into California crossing the Golden Gate Bridge. 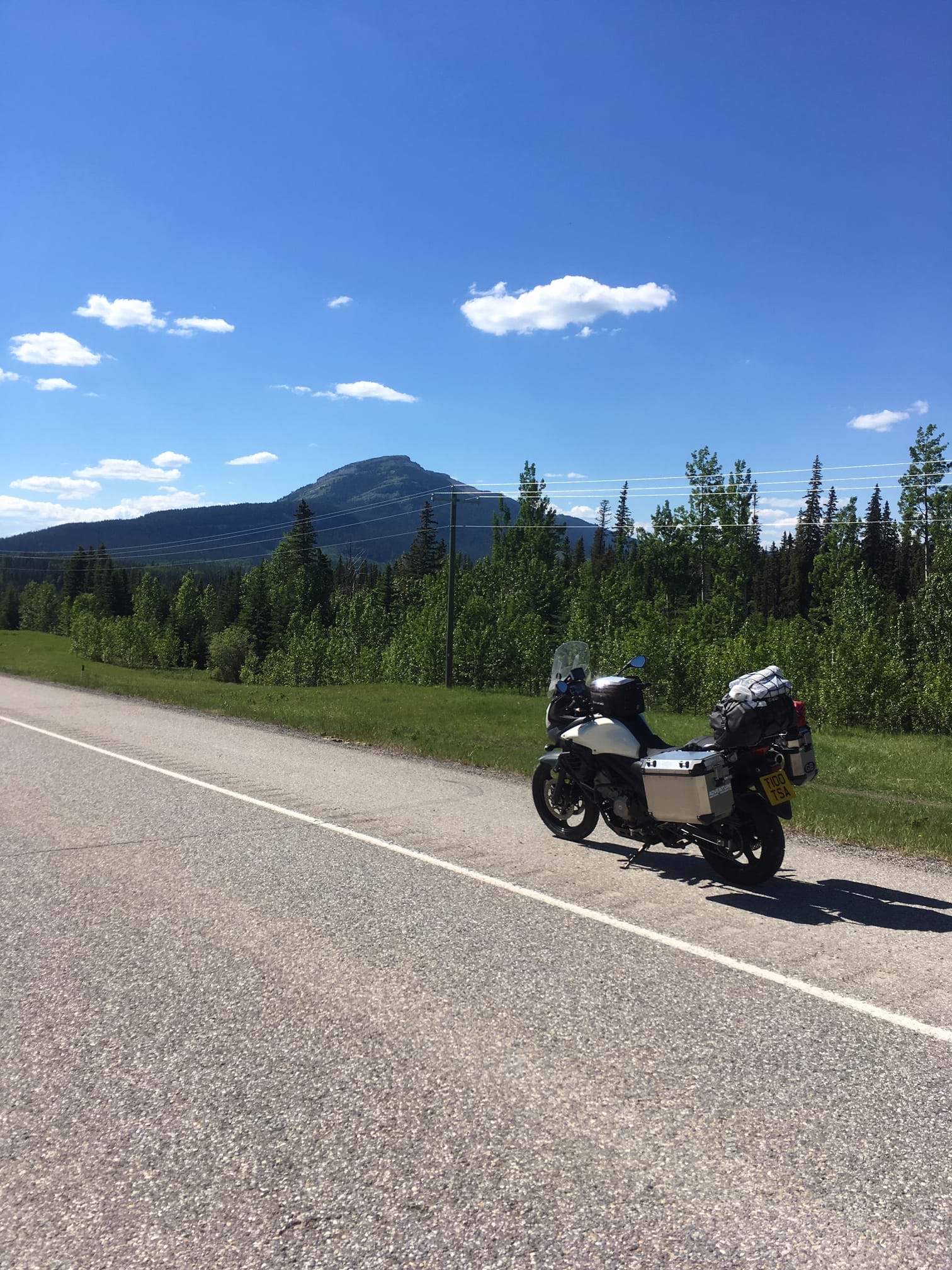 Trading in the vast open plains of Canada and America for the hustle and bustle of Japan, the couple shipped their bike to New Zealand while they flew to Tokyo. Two weeks travelling around Japan by bullet train, Tim and his wife visited the Suzuki Museum in Hamamatsu. Pictured is a Suzuki M30. 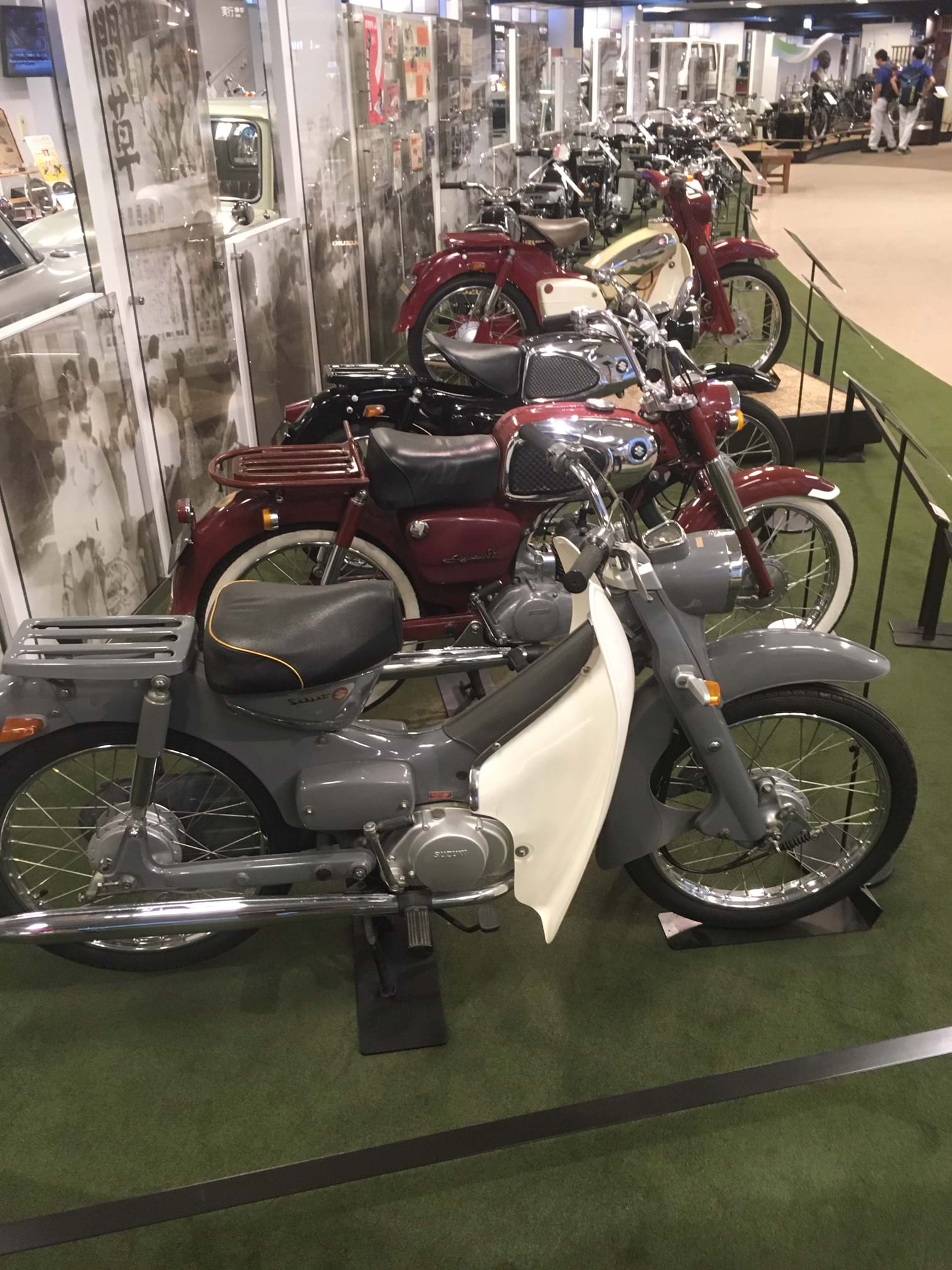 Tim added “that two stroke cub like bike was the first bike I rode on the road, which I bought for the princely sum of £3”

After a regrettably short two weeks Tim and Sue pressed on to be reunited with their V-Strom in New Zealand. Here they would discover the beauty of both the north and south islands.

Tim told us “I got to see a motorcycle show, and in Invergargill we saw Burt Munroe’s motorcycle, as featured in the film with Anthony Hopkins. New Zealand is a biker’s paradise and you can rent a V Strom from Colemans to go exploring. Every day the views seemed to get better with amazing mountains, volcanic areas and twisty roads.” 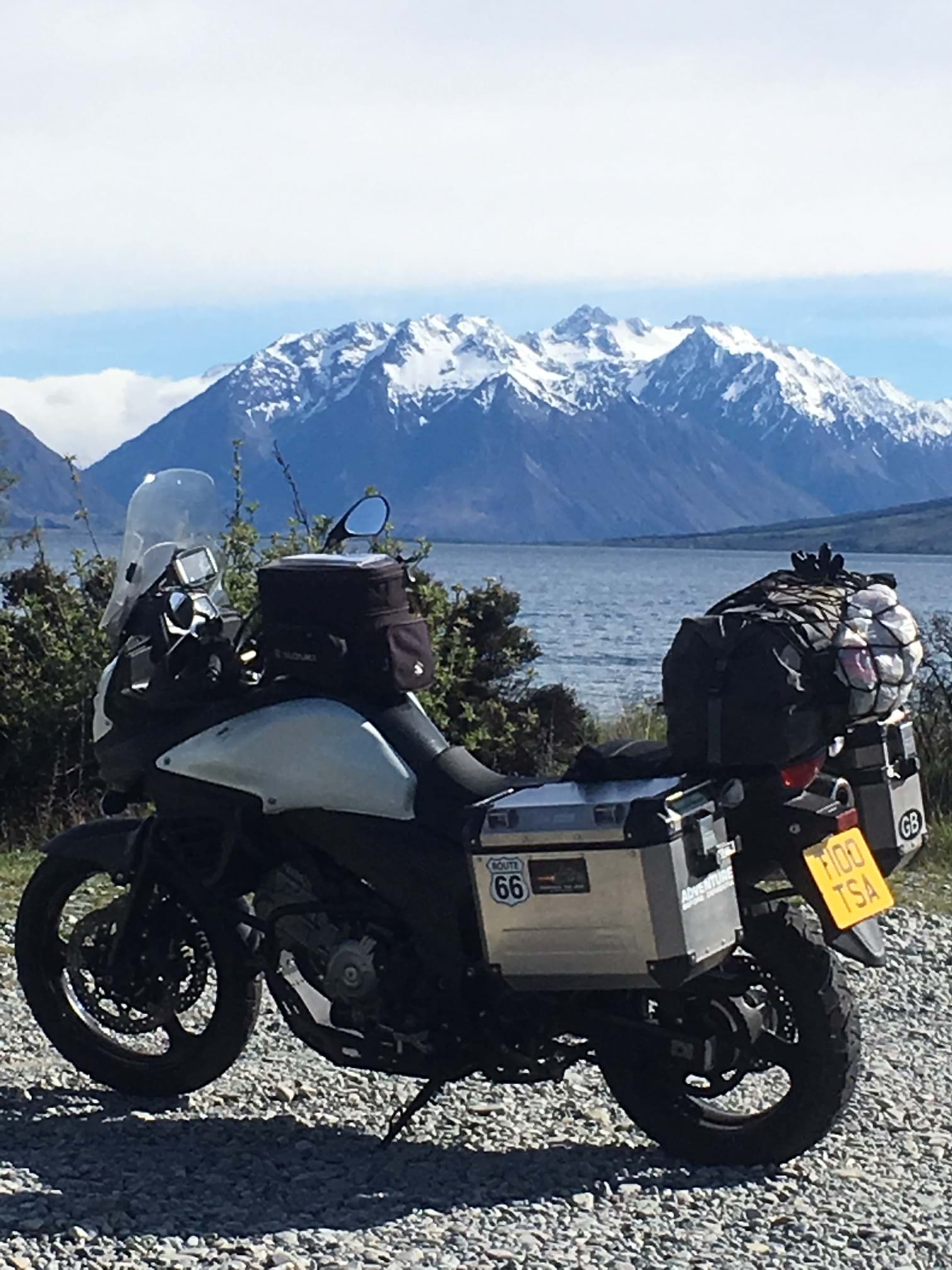 Having done 5323 miles in New Zealand they then headed to Australia and arrived in Melbourne. From Melbourne to Broken Hill and Silverton, where Mad Max was filmed, stopping on the way to spend New Year staying on Phillip Island. Then it was onto Canberra, Sydney, Brisbane, and Cairns before crossing the desert areas of the Northern Territories.

“Sometimes riding for hours with little to see in the way of civilisation or fuel stops. The days were long, hot and hard. We had wanted to leave from Darwin and island hop the Phillipines but decided to head to Perth and effectively ride around Australia. We stopped north in Jurien Bay for a couple of days by the beach in a cabin. Bliss!. Perth was our final stop, we had done 9623 miles in Australia.”

Malaysia next, where fuel was at a price of 45p a litre! Low cost hotels, great food and 1565 miles later it was onto Thailand and the island of Ko Samui. Where an old friend of Tim’s had retired, after 20 years worth of catch up, Tim and his wife rode over to Chang Mai and then to Myanmar.

On to India, and some of the worst roads of the whole trip. Damp and mountainous roads consisting of stones and mud, it was 16 hours before they arrived in Imphal to sleep. At one point of their adventures in India it took 6 hours to do just 60 miles, following three SUV with lights and hazards on as they tried to pick a route around the mountains and not fall off! 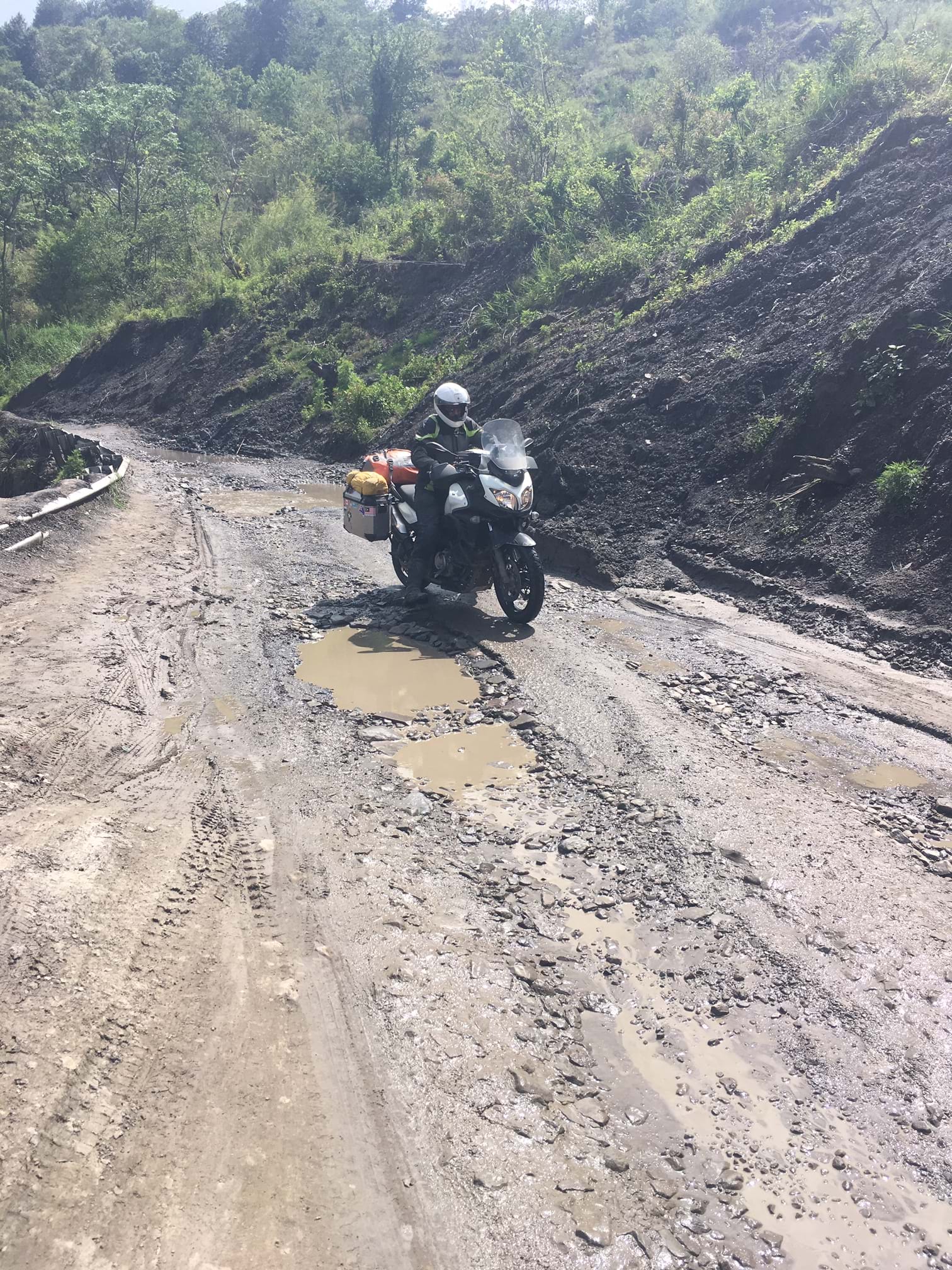 “We crossed northern India and into Nepal where we got a flight to see Everest close up. We did 520 miles in Nepal and preferred it to India. Dropping back into India, we saw the Taj Mahal staying just 500 metres away. A great hotel with a roof top swimming pool. The weather was in the 40s most time so it was hot and humid. We got hit by a car trying to avoid a pothole, which put a dent in the pannier. I managed to keep the bike upright.”

After facing problems due to a rather poor courier service from India to Kazakhstan, the bike arrived for the home stint of the journey. The delay had meant their 30 day visa was fast expiring so the couple had to cut this part of their trip short. However, the worst part was yet to come…

Tim explained “A delay at the border while everyone went to lunch meant we were running late for our stop on Beyneu. We never made it. Trying to join a new road we missed the 6 inch step between our road and the new road. The bike was catapulted into the air sending Sue and I flying. I fell off the bike breaking my collarbone and my ribs. The road builders who were living in portacabins by the road rescued us. They called the Police and ambulance. People ask how I managed to travel back. I wonder now myself, many weeks later in pain and awaiting surgery to remove the plate.”

After such a disappointing end to such an incredible trip Tim was clear in stating that it was more than worth it.

“We saw some amazing places, sights that are on bucket lists, and met some wonderful people. Best of all I got to spend 24/7 with a wonderful woman who I only met when I was 51, and thought the best was behind me. How wrong I was! What it has done is made me appreciate this country more and the wonderful sights on our doorstep

As for the V-Strom 650, it is still in the Police Station in Beyneu Kazakhstan but Tim assures us he is working to bring her back home. The bike has much more riding to do yet!