Turning the GSX-R1000 XRJ1 into an endurance contender 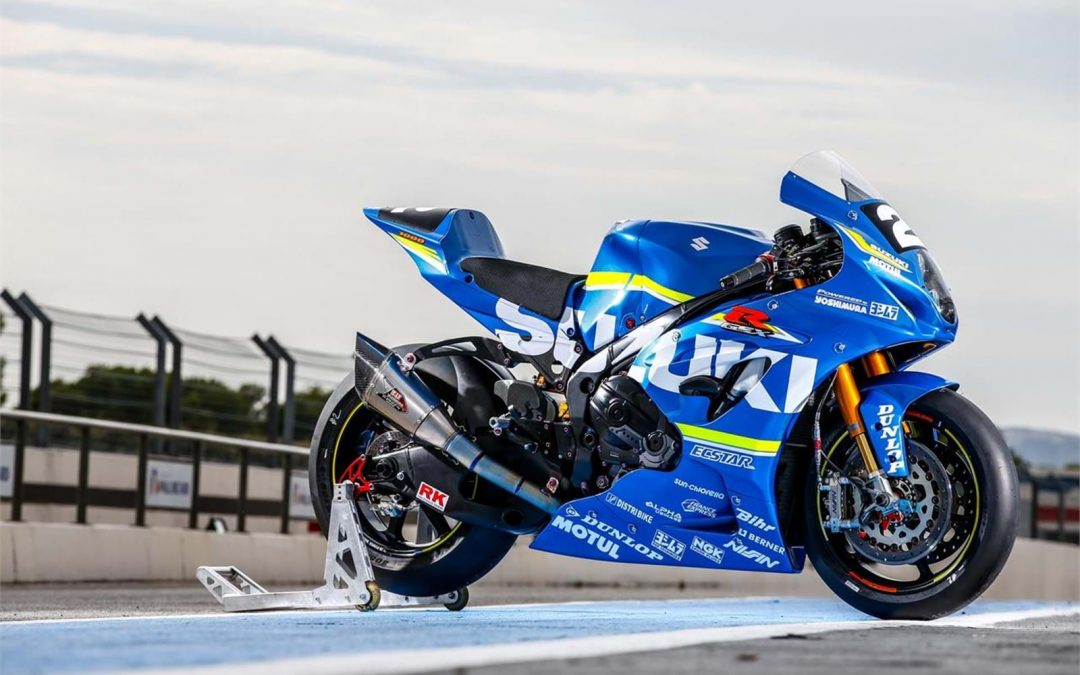 Since 2007, SERT (Suzuki Endurance Racing Team) has won eight Endurance World Championship titles with the GSX-R1000, but at the end of 2017, SERT raced the new GSX-R1000 for the first time at the Bol d’Or. We visited them at a winter shakedown test and sat down with the team’s technical manager, Dominique Hébrard, to get his views on the new superbike and the year ahead.

The wind is whipping across the hills above Mireval in the South of France, the location for SERT’s shakedown test and Dunlop’s test facility. Despite being just half an hour from Montpellier, it’s early February and there’s an expected chill, but when the sun breaks through it’s enough to warm your face and the paddock’s asphalt. The home straight runs from left to right, and ends in a big, fast right-hander, reminiscent of Brands Hatch’s Paddock Hill bend, with its steep drop.

Standing in the paddock, turn through 180°, and you’re greeted with views of the sea, and the circuit snaking its way through a series of tight, technical turns below you, before it comes back up the hill into a right-hander onto the home straight, that sees the bikes wheelie over the crest and past pit wall.

Etienne Masson is currently putting in the laps onboard the team’s 2018 GSX-R1000 superbike. It’s a factory-built machine, therefore gets its own XR designation. This is XRJ1. He crests the rise onto the front straight, the Yoshimura exhaust howling away as he revs to 15,000rpm and beyond before selecting another gear, the front Dunlop slick waving playfully in the air, and the chinbar of Masson’s Shark helmet resting on the tank. Leaning over pitwall is Dominique Hébrard (below), SERT’s technical manager. He holds out the pitboard showing L0, signalling for Masson to return to the garage. He then chalks off another lap on his clipboard. Every lap is recorded; it’s imperative that the team knows the mileage of each engine, as they prepare for 2018. 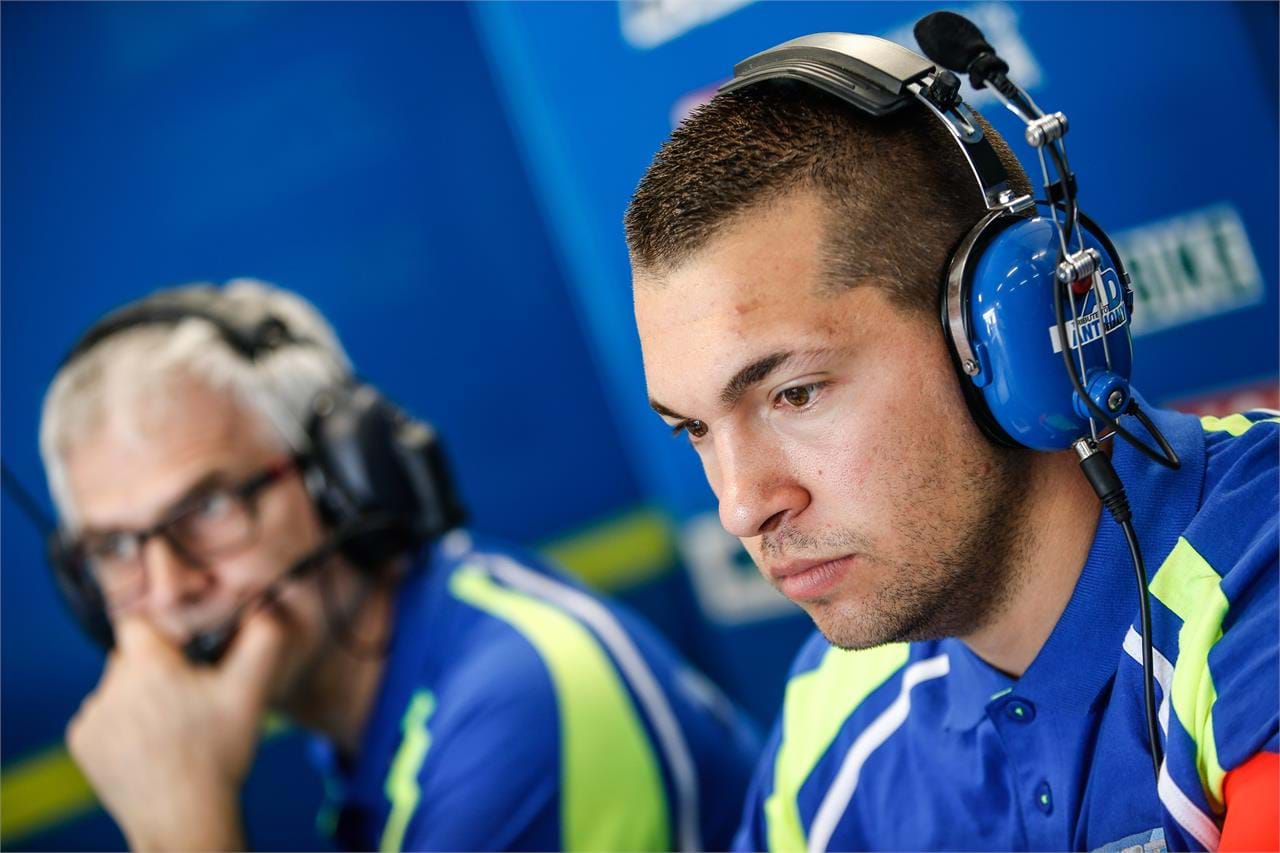 “The bike we have is ready to win, for sure,” Hébrard later tells us later over a café and pain au chocolat. “The factory and Yoshimura worked very hard on the base race bike and it is very good, but the XRJ0 (the first factory-built superbike based on the new GSX-R1000) was a lot more suited to sprint racing. We are making the XRJ1 a lot more suited to endurance racing.”

He then highlights just how much experience the team has, and how much value that holds when you’re trying to win championships at this level.

“We saw that some parts, like footrest brackets, were too breakable in a crash,” Hébrard explains. “So, we started modifying and developing our own parts. Even if they are a bit heavier we need to save as much time as possible in the pits if we do have a crash. Also, for example, another thing we changed were the connectors for the headlights. The original race bike had three separate connectors for the endurance headlight, but we replaced them with one single connector, which saves valuable time in the box.”

Weight, however, isn’t an issue with the XRJ1. “There is a minimum weight in EWC, and the bike from the factory is under the 175kg minimum, so adding weight isn’t a problem, we’re not adding unnecessary weight.” 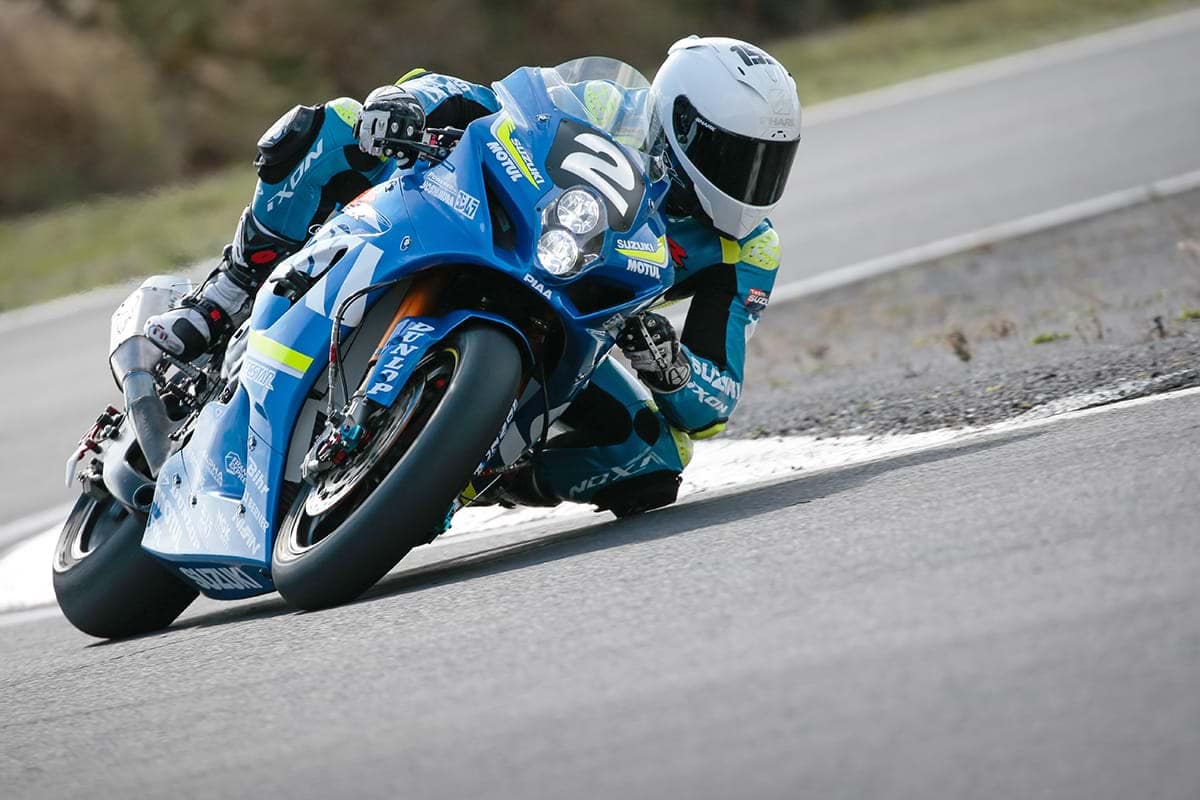 The 2017-18 EWC season is the debut campaign for the new GSX-R1000, and Hébrard and the riders are already impressed by the step forward in the machine’s performance and potential.

“The new machine is fully different. Firstly the engine is so much more powerful. The riders tested the bike for the first time and were like…” He puts a wide-eyed expression on his face. “Okay, the power is incredible.

“But the big difference is the chassis. With the old machine it was harder to get the balance right. You are always balancing things like maneuverability, stability, grip. On the older bike you search for one, and you lose out on another. But on the new bike the range for the settings is a lot bigger. We feel the engineers really worked to concentrate the mass in the right place, and we can keep grip, maneuverability, and stability. This is because of things like the new frame, where the weight of the bike is concentrated, where the engine fits into the frame and where that weight is. Even the new endurance fuel tank keeps the weight lower, so the bike is easier to ride and direction changes are easier with a full tank of fuel.” 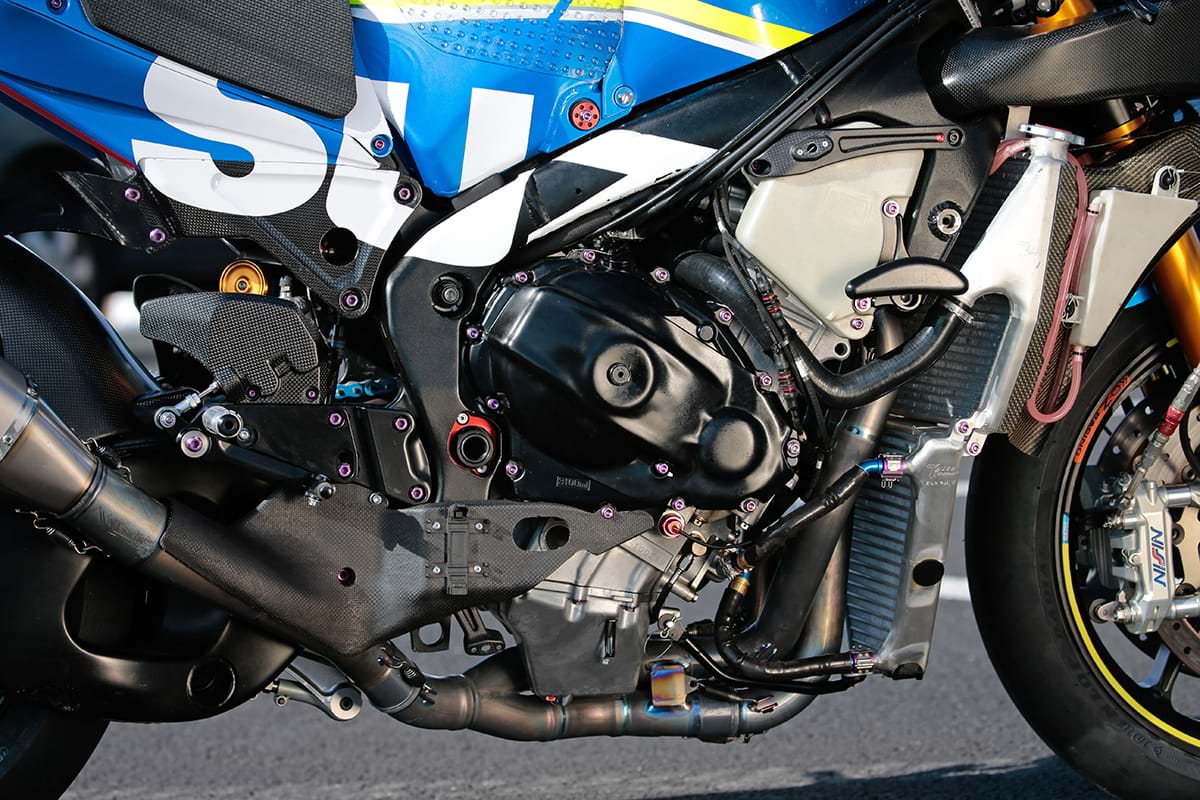 With the way the calendar works in EWC, SERT has already raced the new GSX-R1000, at the Bol d’Or at the end of 2017. It was a solid outing, but as Hébrard explains, it was fraught with challenges.

“We had an engine, throttle bodies, and airbox. These are standard components from the road bike. With the engine, we even retain the standard bottom end and conrods and pistons. We use the same variable valve timing, too. But we were waiting on lots of parts from the factory and from Yoshimura. The frame is a standard frame but with adjustable head and swingarm pivots, the bodywork and fuel tank is all factory and Yoshimura-supplied, for example. But in the end, we didn’t have enough time to prepare properly for the race.

“Preparation is a big part of endurance racing. We see sometimes lots of bikes have trouble with things like electronics, or things coming loose. But we prefer to make good preparation to avoid these mistakes during the races. If you prepare well, you know in the race you just have to ride, ride, ride, be quick in the pitstops, avoid a crash, and you can race for the win.

“But for the Bol d’Or, we were left without enough time to prepare as we normally do. We just built the bike and went racing, and we had some problems; some issues with sensors, the brake pads during wheel changes. We had a refuelling issue, too. But we had a solid race. We have seen in the past some teams get new bikes and it can take a full year or more to get at the front. But now we have had one race, we know the potential, and go ‘okay, now we must go and win’. This winter we have been able to prepare, and we know we can be competitive for the rest of the season.” 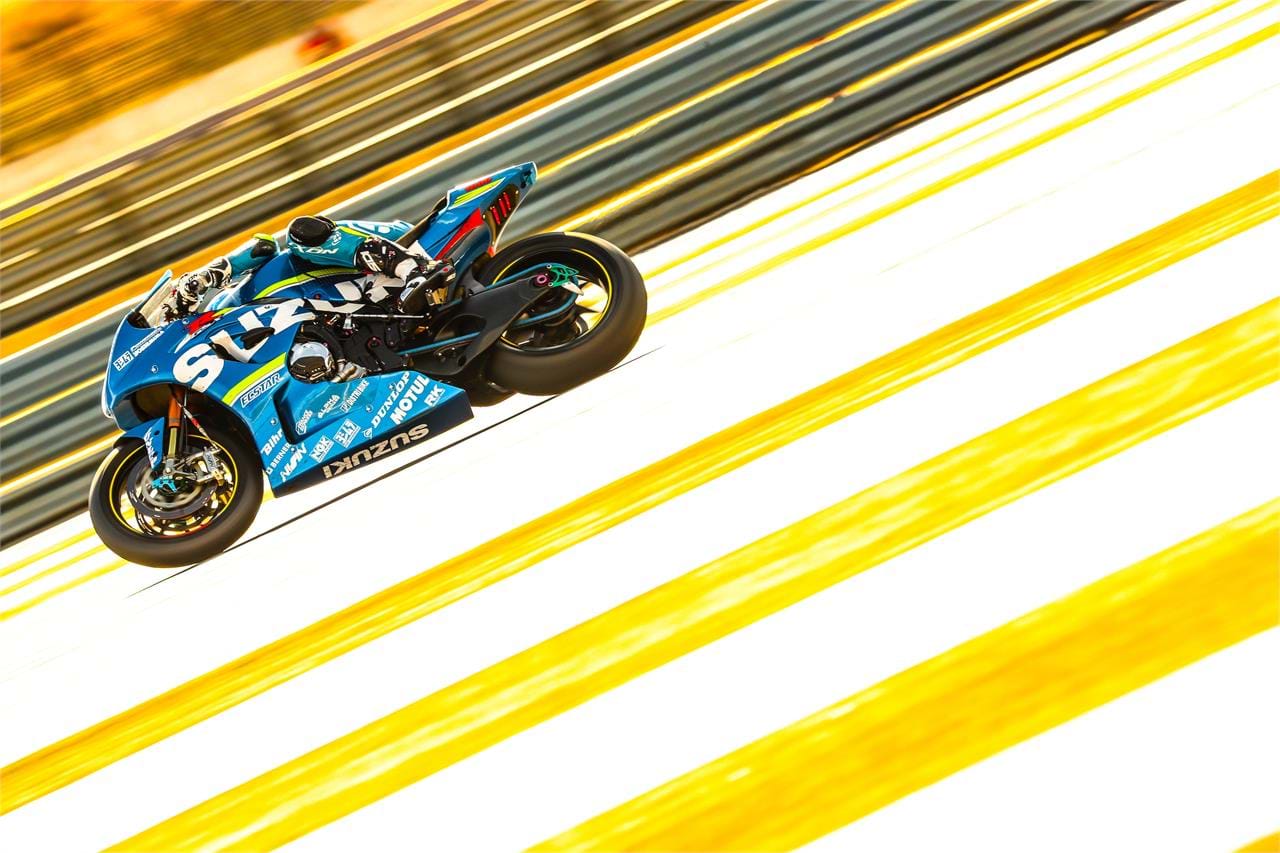 That preparation isn’t just achieved with laps on the race track. Over the winter the team has also been working on the dyno and on the electronics package, from fuel maps and engine braking strategies to fuel consumption.

“The factory electronics were geared a lot more around sprint racing, too,” Hébrard explains. “So this winter we have been doing lots on the dyno, working on fuel consumption and trying to decrease this so we can have fewer pit stops. We’ve also added a fuel warning light, as this wasn’t in the kit electronics package. We’ve worked with the riders to improve mapping, traction control intervention. All things we couldn’t do before the Bol d’Or.”

Outside, the sound of a GSX-R1000 superbike being fired into life resonates through the building we’re sat in having coffee and croissants. Hébrard picks up his clipboard and puts his beanie hat on. But he still has time to reflect on the current EWC championship. 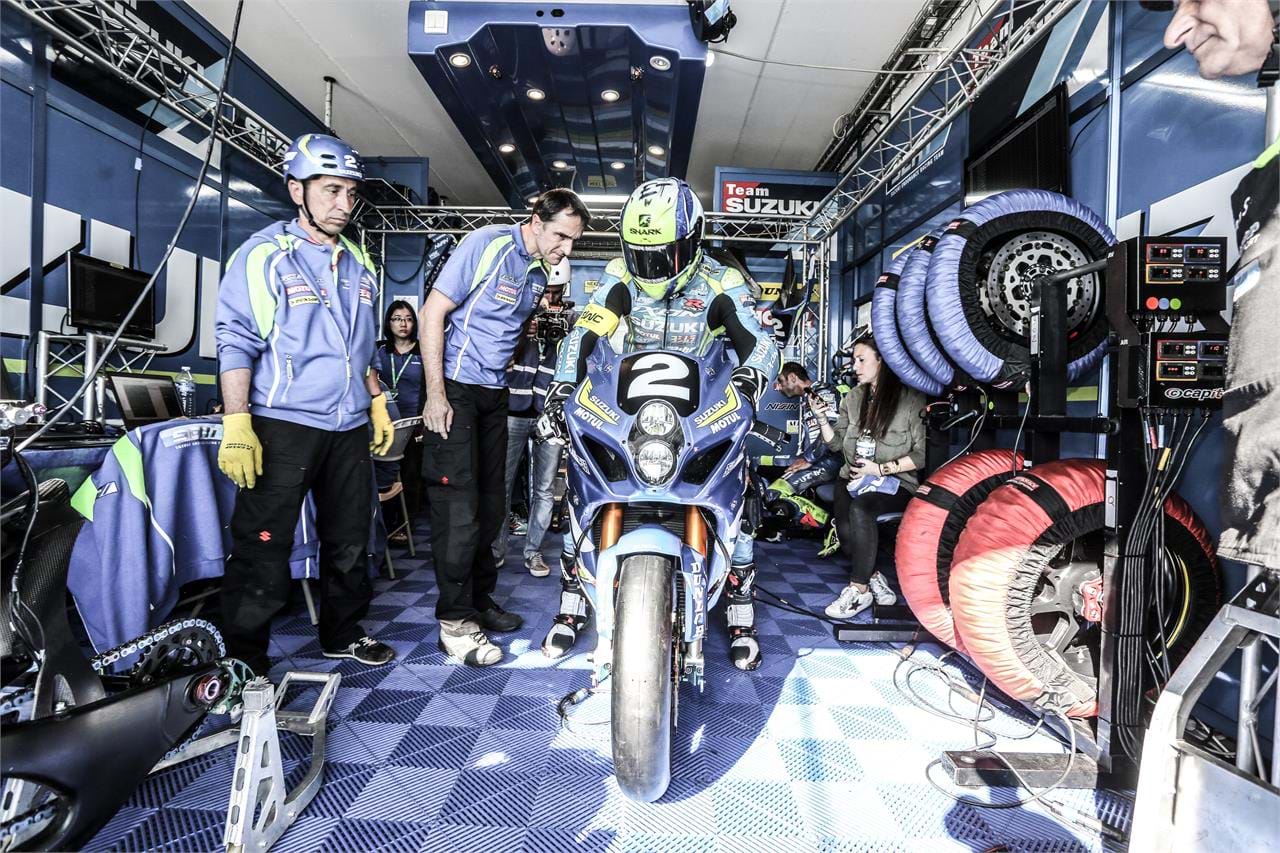 “For sure, the philosophy of endurance racing is changing. Some races might be 24 hours, but they are more like sprint races now. We saw at Portimao in 2016, after 12 hours of racing, we missed the win by less than a tenth of a second. Etienne [Masson] and David Checa raced for the last half an hour, changing position. It was incredible.

“But I know MotoGP, I know World Superbikes, but for me, I love endurance. For me, it is more human. In sprint racing, you put the rider on the bike and you go, ‘okay, go and win, please’. In endurance the level of preparation is high, but also the riders racing long periods, the team in the pits, looking at your race strategy, changing it during the race if you need to. It’s the work of the riders, the mechanics, people like the cooks and people that look after the riders wellbeing during races in places like Suzuka. When you win it is a lot more of a team feeling.

“In 24-hour races I get no sleep. The riders get maybe a few minutes but not too much because then it is harder to get going again when you have to go out. One of the most important jobs is that of the timekeepers. When the rider is alone on the track, at night, maybe getting tired, it is important for him to have that contact with the team in the box and know we’re still with him.