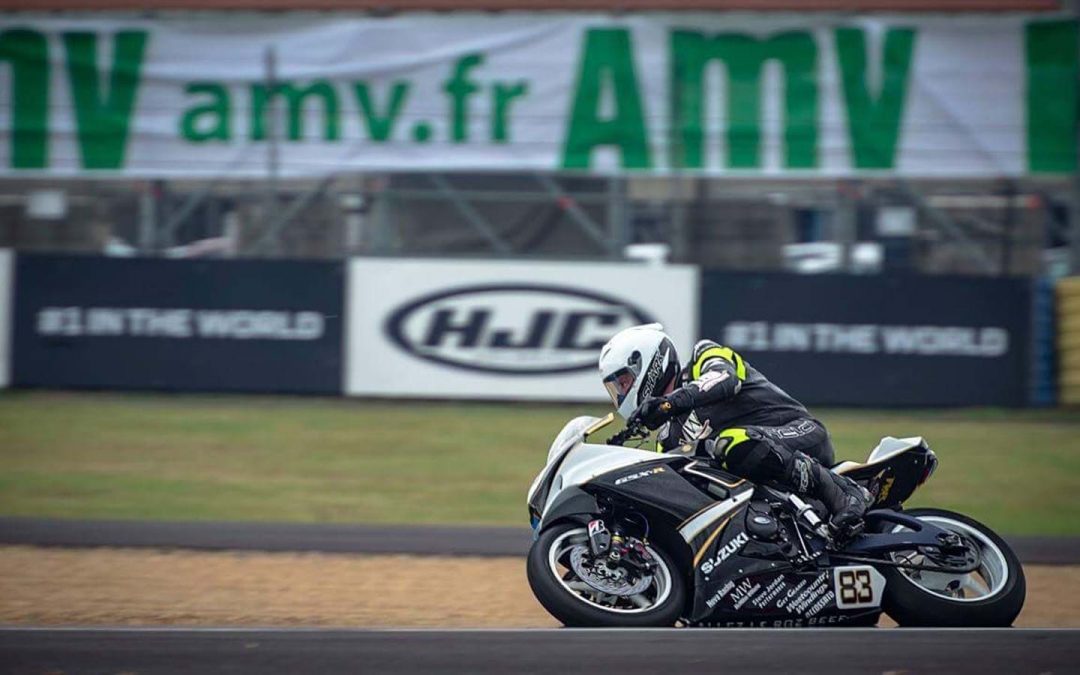 You probably already know the name Talan Skeels-Piggins. The paralysed motorcycle racer founded the Bike Experience charity to help other disabled riders get back on a bike, and has regularly been competing against, and beating, able-bodied riders on his SV650 in the competitive Minitwin series and a GSX-R750 in the Thunderbike class. He’s also became the first disabled rider to finish on a National class podium on his GSX-R600 in the MRO 600 series, and is a former disabled world champion. He is just back from racing at Le Mans in disabled world cup support race at the French Grand Prix.

“On May 20 I took part in the first International Disabled World Cup motorcycle race at Le Mans, France. This historic event was an official support race at French MotoGP. As one of the two British racers invited to attend the event, I was excited and honoured to be representing Great Britain in the 600cc category on my GSX-R600.

“My preparation did not go entirely as planned; with a crash at Donington Park just 13 days before the race. Whilst I wasn’t too badly injured, the bike needed some attention. After eight frantic days I was heading into the channel tunnel with a repaired, but untested, race bike on my way to France.

“Arriving at Le Mans, the International Bridgestone Handy Race paddock was along the 24-hour circuit. Surrounding us were campsites, campsites that had bikes being bounced off the rev limiters non stop – and I mean non stop. Never have I encountered such fanatical petrol heads, who were feeding engines with fuel and exhausts with combustible materials without cessation.

“Whilst waiting in the transport to get to the track for practice and qualifying, we were treated to a thunder and lightening storm that brought hail down so hard the practice session was eventually red-flagged. The circuit became wet, really really wet. Our practice began in light rain and that got gradually heavier throughout. Everyone was cautious to begin with, but soon found that the newly surfaced track was giving amazing levels of grip. Having new bodywork changed my seating position on the bike, as the tail piece with hard foam seat covering sat me considerably higher than the standard seat piece. The new position put a lot of strain on my wrists, not so much of a problem in the wet as I wasn’t braking hard, but it would be an issue in the dry.

“In our qualifying we were red–flagged halfway through, the thunderstorm once again brought hail and standing water. Once it was safe we headed back out to finish the session. I was lucky enough to know the data engineer from the Mistral Moto2 team, so I was parked outside the garage during the break which offered a bit of shelter. The father of one of the riders popped out to offer his thoughts, a certain Mr. Wayne Gardner, who simply thought we were all mad!

“At the end of qualifying I was 7th out of 30. A decent position. Later that evening my team and I were able to visit the Mistral Moto2 garage, and have about 30 minutes chatting with Wayne Gardner and Karel Abraham. Karel was interested to hear about the racing as well as The Bike Experience (the charity Talan founded aimed at teaching disabled people how to ride motorcycles). It was great to see the interest from all the racers, and ex-racers, in what we were doing.

“Saturday brought sunshine, clear skies and a crowd of thousands of race fans. The start was a ‘Le Mans’ style grid line up, followed by two lap formation behind a safety car, then eight laps for the chequered flag. In pairs we lined up behind the safety car and I set about warming up my tyres. I was on brand new Bridgestone R10s that were stone cold due to a mechanical failure of the generator, which meant the tyre warmers were, well, not warm.

“Initially the under-pressure tyres caused me to bounce around and slip under braking. After the first lap they were beginning to get some heat and the bike began to turn as I expected. At the end of the second lap the safety car pulled in, we rolled down towards the start line, all waiting for the French National flag to be waved. The noise of the crowd went through my helmet, my ear plugs and into my very core, it was intense and massively addictive. The flag dropped and we were racing.

“As expected, the litre bikes came shooting up past me and the ones in front pulled away. I was cautious with the cold tyres and didn’t want to get involved in any fairing bashing at the first chicane. Through the chicane and down to Chapelle the group was slightly spread out, and by the time we went into Garage Vert for the first time, there was a bit of order about the race. I was gapped by the faster litre bikes on each straight and was forced into some very late braking in order to catch up. After the third time of locking the front on the brakes I decided it wasn’t going to be safe to continue this style of riding for the race. I went back to what I knew best, smooth riding.

“The new seating position proved to be a problem for me. With a very dry and grippy surface I was able to brake hard, but that meant my backside started lifting from the seat and bouncing me off the centre line of the bike. I do not have stomach muscles, and so the act of trying to straighten myself up on the bike means lots of pulling and pushing on the bars whilst dragging my tummy onto the tank. As a result I cannot simply focus on going fast, as I can’t be sat on the ‘upside’ of the seat in a corner at pace. Nevertheless I enjoyed a decent battle with two litre bikes and another 600.

“The chequered flag came earlier than I had expected, as I didn’t see the last lap flag waved to us, and suddenly it was all over, the marshals lined the circuit, the crowds waved and cheered, we all gave thumbs up to the other racers and waved back to the spectators. I was ninth overall from thirty starters. The position translated to fourth in all of the 600s (twenty of us) and second place in the 600cc paralysed class. A very respectable finishing position and one I and be proud of.

“The victory in my class went to fellow British rider Michael Reynolds, and congratulations go to him. There were so many memories to treasure: being part of a MotoGP event, getting invitations into MotoGP garages, meeting the racers you see on television, wheeling out onto the start/finish straight and hearing the cheer of five thousand people.

“The most important part was that we, the disabled racers, got to show the world that anything is still possible.

“My thanks go to you; my sponsors, my supporters, my friends, my family, my fellow racers.”