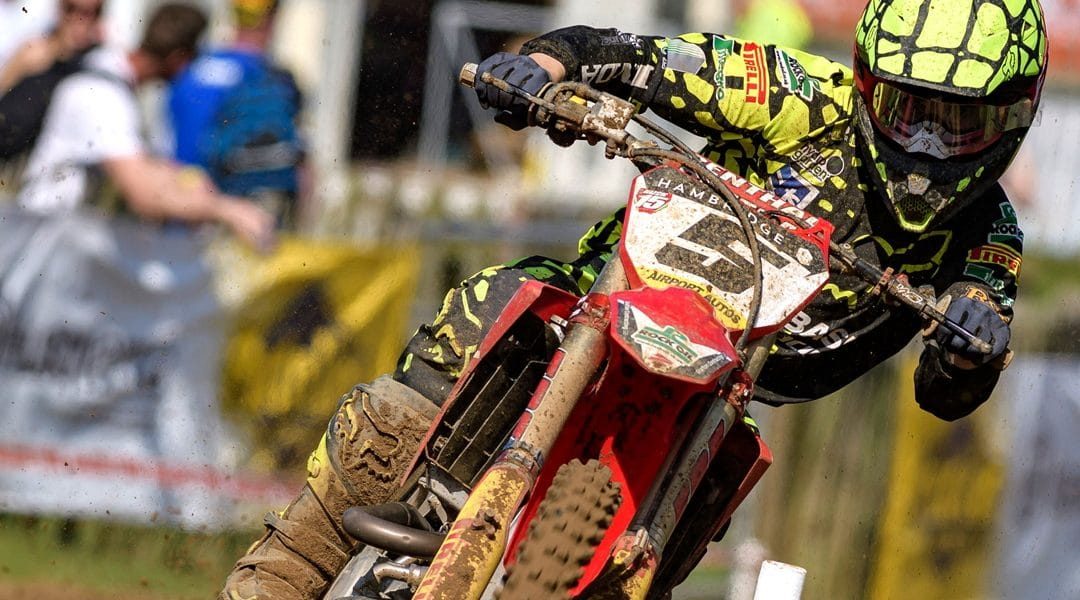 Graeme Irwin on his Honda CRF missed out on an overall MX1 victory by a single point Sunday in the Maxxis ACU British Motocross Championship at Cadders Hill, Lyng, where he racked up his second podium finish in as many rounds.

His MX2 teammate Martin Barr on his Honda CRF 250R raced through the pain to finish joint third on points, ending the day fourth overall on a tie-break.

“To be honest I’m a little disappointed,” Irwin said. “I should have won both races, but I still need to say a big thanks to the team – everything was fantastic.”

After qualifying, Irwin came out fighting in both races on his Honda CRF 450R, recording a pair of second-place finishes on a sandy Norfolk circuit where passing opportunities were limited. His overall result matches his finish at the opening round in March, and he now sits a clear second in the standings, 13 points off the lead.

“It was a tough track to pass on, but I’ve only lost one point in the championship,” he said. “It’s been a slow start to the season for me after coming back from injury, but I think I’m getting better and better.”

Barr came into round two carrying a bad shoulder injury from the previous weekend, but he amazed his team by qualifying second before putting together two strong rides, finishing third and fourth on his Honda CRF 250R despite being in obvious discomfort.

“I knew it was going to be tough today after injuring my shoulder when I crashed last week,” he said. “With my injury it wasn’t so bad a day – it could have been better but it could have been a lot worse. There are plenty of races still to go and I’ve got a couple of weeks to rest up and hopefully come back stronger at round three.”

Honda Buildbase owner Dave Thorpe paid tribute to Barr’s professional approach to racing. Despite having treatment every day this week and not being able to ride the bike, he was able to put together a string of impressive results.

“Graeme rode well. The club prepared an immaculate venue, but I think maybe because of the dry weather passing opportunities were few and far between with the top riders, and the blue flag system, especially in the first race, left a lot to be desired.”

Going into the third round at Canada Heights, both Irwin and Barr are well positioned to manoeuvre up the table.