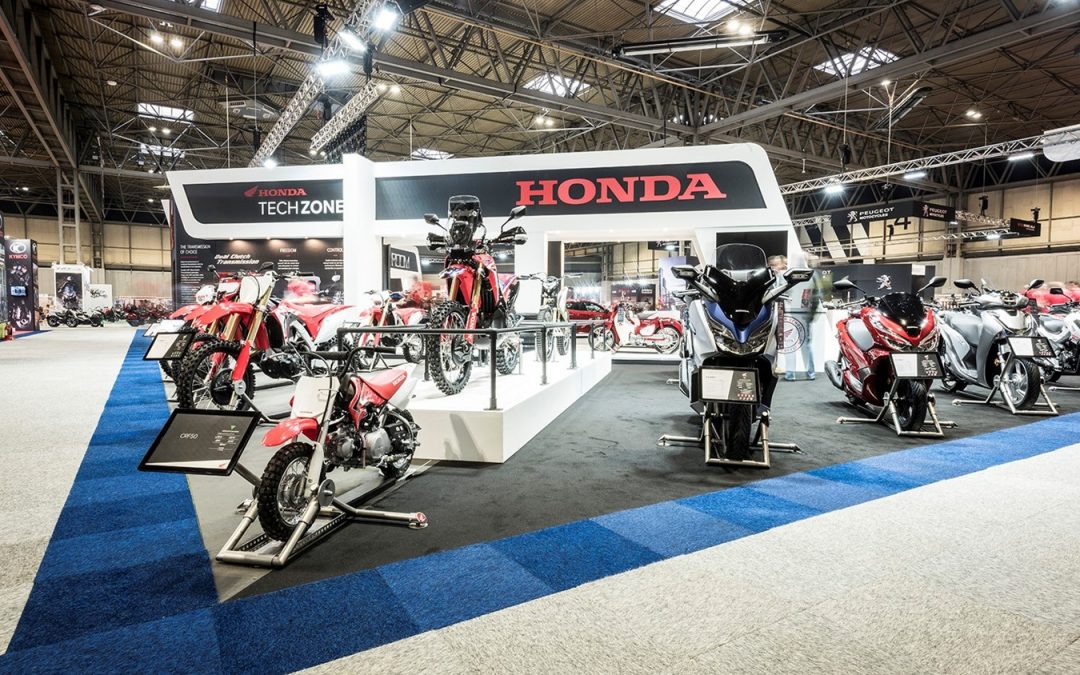 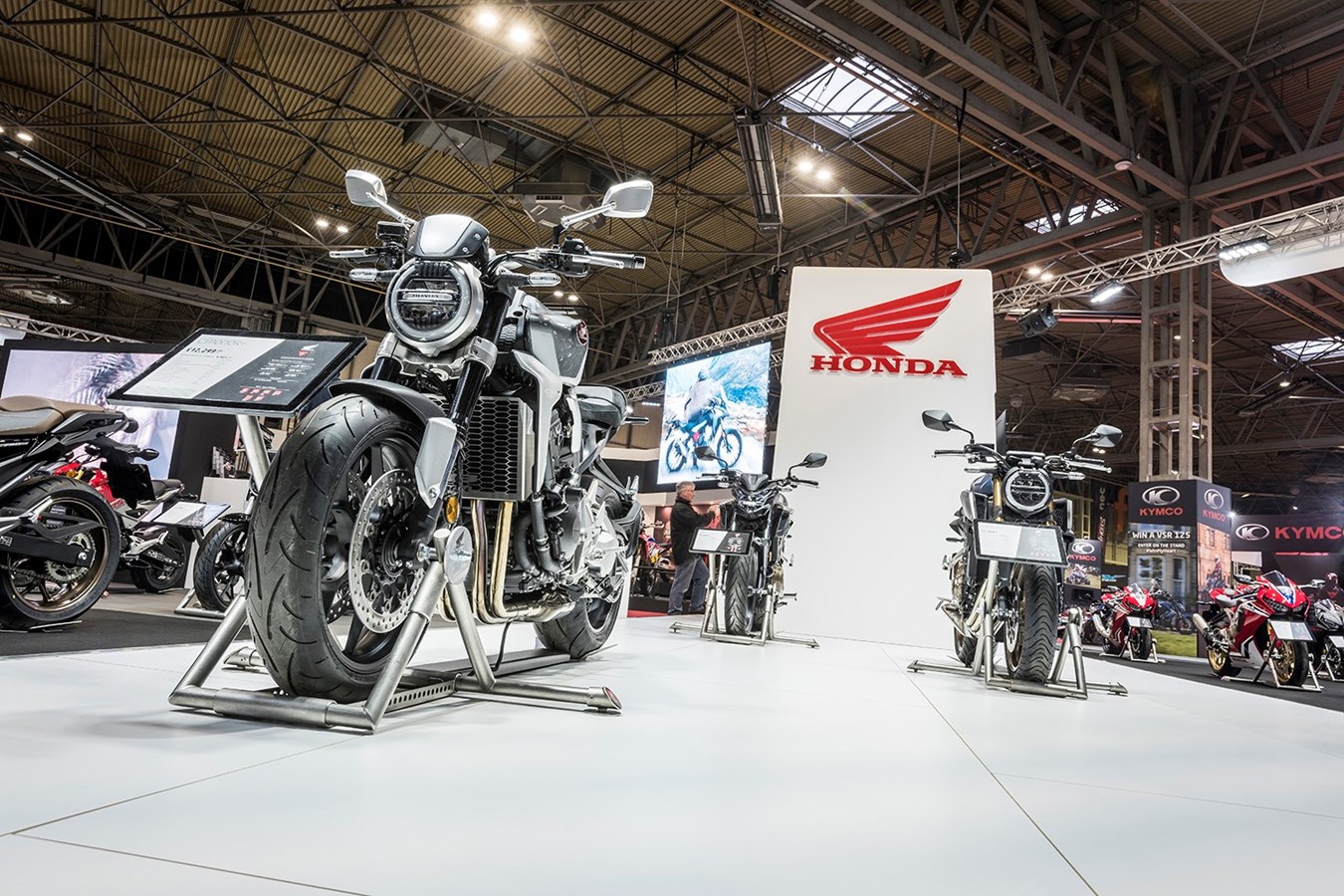 In the build-up to Motorcycle Live, Honda has revealed the displays, features and exhibits which will constitute its vast presence at the UK’s largest motorcycle exhibition. Visitors to the NEC, from November 17-25, will naturally be drawn to Honda’s stand where its comprehensive model range will be on show, including the latest additions to the Adventure, Super Sport and Street model categories.

Five middleweight motorcycles will make their UK debuts – all powered by the latest versions of Honda’s two- and- four-cylinder engines. Revisions to the 471cc twin yield more midrange punch and a sportier exhaust note – which is to the benefit of the 2019: CB500X, CB500F and CBR500R. While the new CBR650R and CB650R take the 649cc inline-four that now boasts both more power and torque as well as a higher redline. 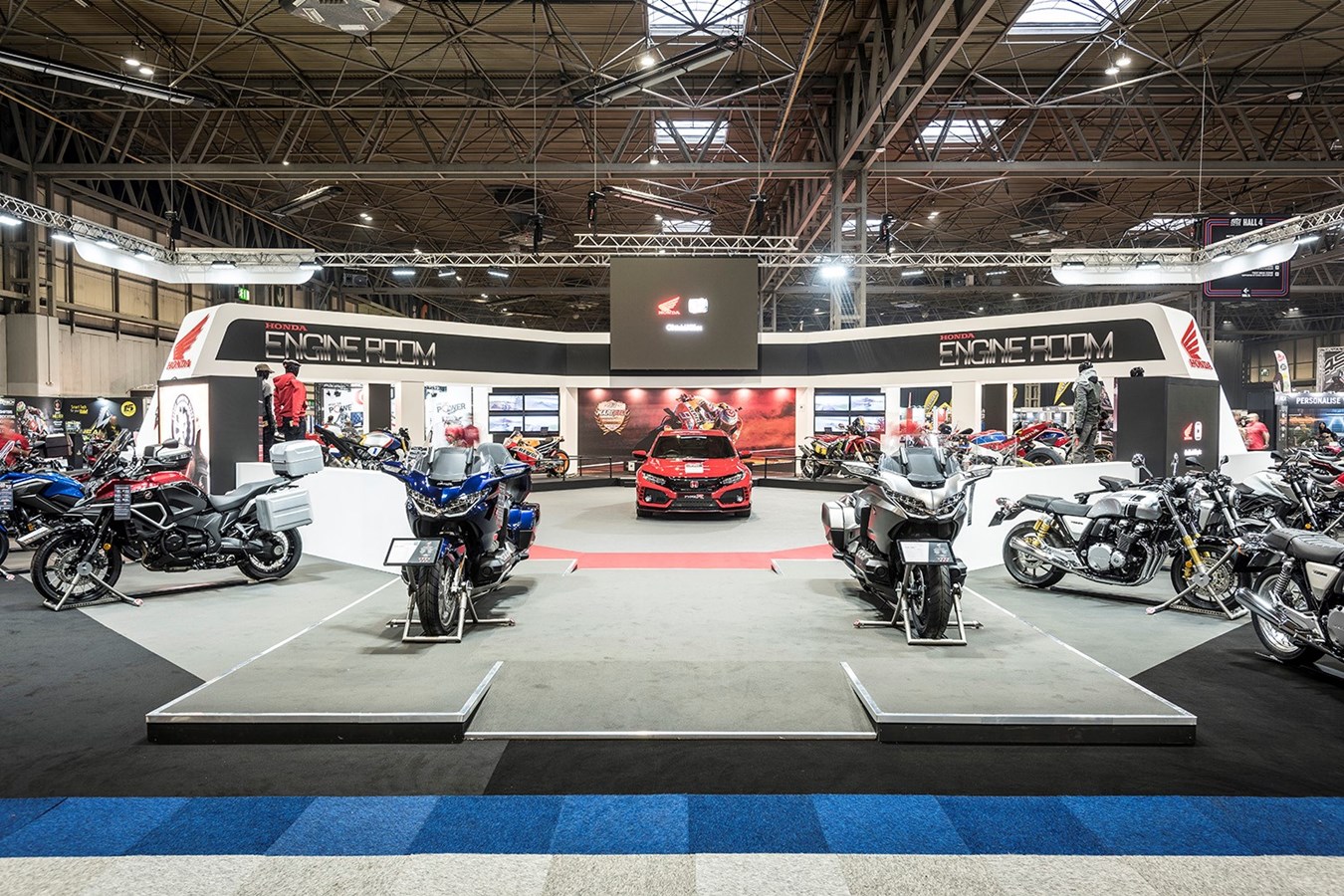 The trio of 500s receive new LCD instrumentation, with gear position and shift-up indicators, and new LED lighting. Tapered handle bars and an assist/slipper clutch feature among the modifications to the CB500F, further cementing its all-round character. Placing an emphasis firmly on adventure, the updated CB500X has been styled more aggressively with the iconic African Twin in mind. To back up those rugged looks are longer travel suspension and a larger front wheel, both combining to offer greater off-road ability. Again drawing influence from a flagship model, the 2019 CBR500R cuts a sharp-edged silhouette – akin to the Fireblade – and provides a sportier riding position compared to its predecessor, too.

2019 marks the introduction of two new models in the 650 segment. The CBR650R arrives with clear sporting intentions: featuring a lighter frame, lower and extended riding position and Honda Selectable Torque Control. The CB650R benefits from the same weight-saving measures and joins the eye-catching Neo Sports family, slotting in between the CB300R and CB1000R, completing the retro-naked model range in the process. 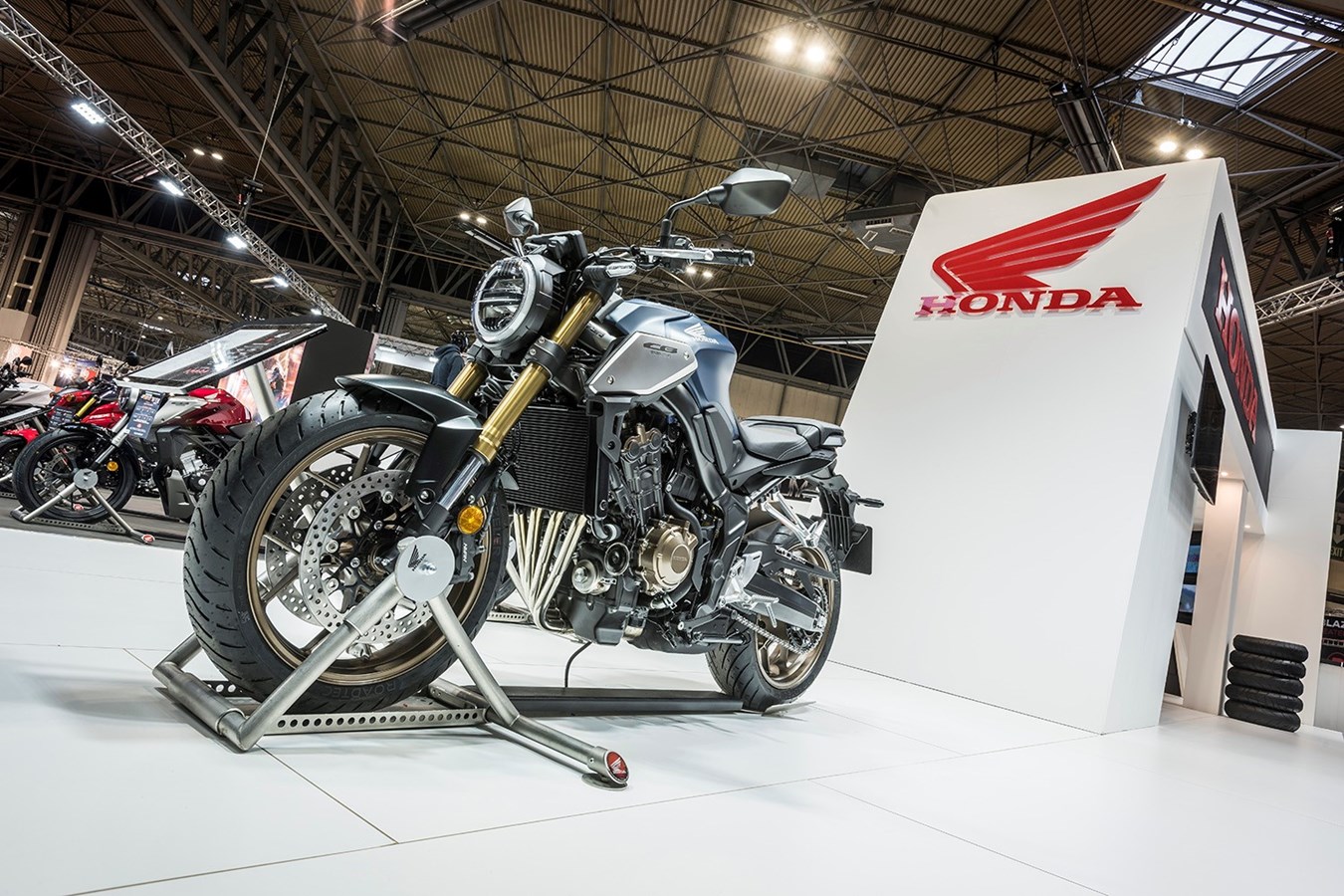 The updated CBR1000RR Fireblade range will be on display too, sporting new colour schemes. However, updates to the flagship Super Sport model aren’t purely aesthetic. The electronic rider aids which underpin all derivatives have been recalibrated to elevate on-track performance and lend the rider more precise control.

Racing enthusiasts will be delighted to see a collection of Honda’s motorsport entrants decorating the stand. Marc Márquez’s championship-winning Respol Honda RC213V and the CRF450RW and CRF450 Rally, which compete in MXGP and the Dakar Rally respectively, will represent Honda’s diverse motorsport activity.

Elsewhere on the stand, visitors can imitate five-time MotoGP champion Marc Márquez on the popular Power of Lean interaction. You’ll also find a DCT (Dual Clutch Transmission) feature explaining the benefits of the advanced transmission technology, which show-goers can put to the test, first-hand, courtesy of the Experience Adventure facility and the Test Ride Zone based at the NEC, where a wide range of Honda models are available. 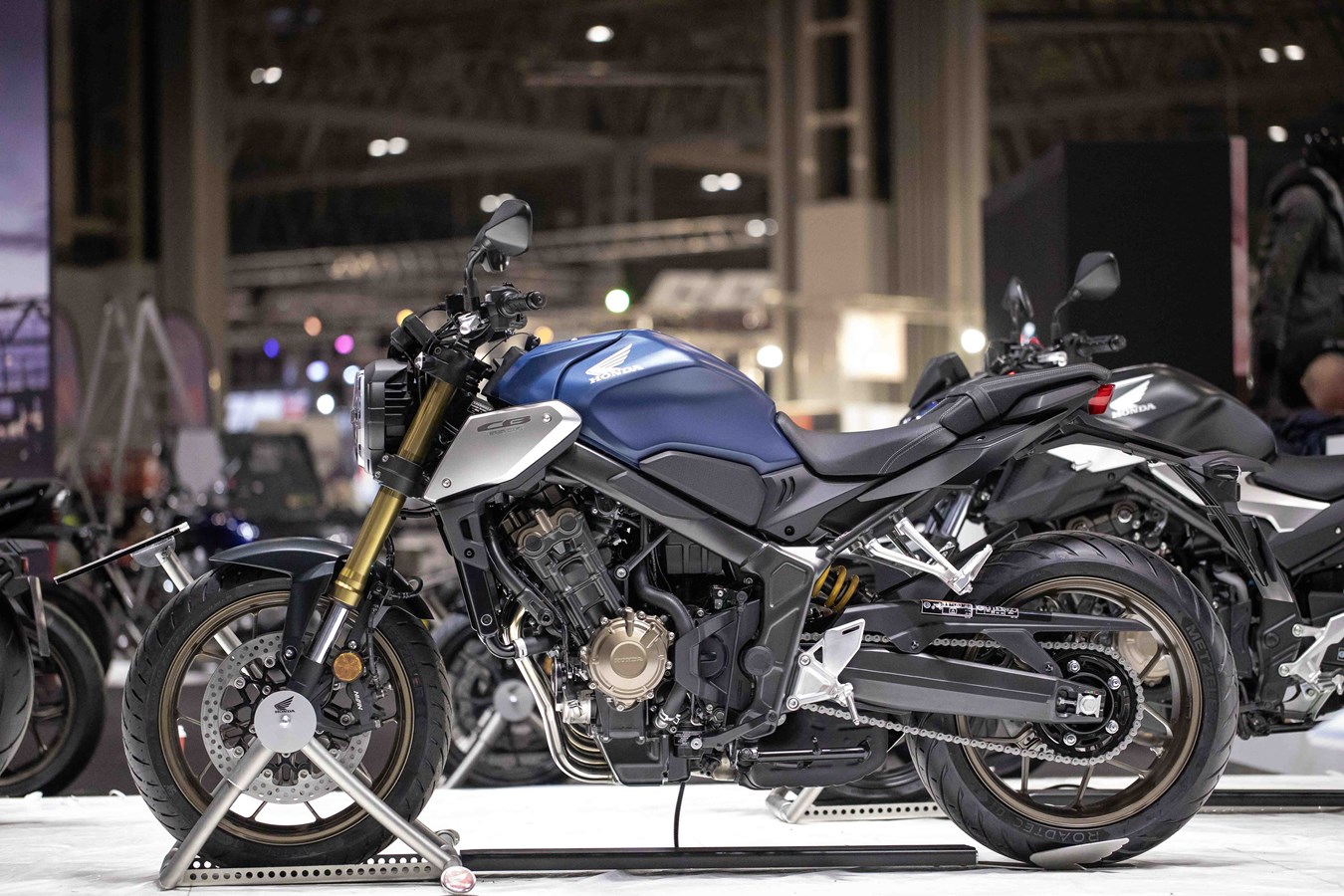 Should these test ride sessions ignite further interest in specific models, visitors can sign-up for an experience package at one of Honda’s off-road experience centres (run by three-time Motocross World Champion Dave Thorpe), or the Ron Haslam Race School experience, to see how these machines perform in their natural environments. Those looking to go one step further can join Adventure Roads 2019: a once-in-a-lifetime, guided ride that will tour 2,300 miles across South Africa on an Africa Twin.

Speaking ahead of the exhibition, Head of Honda Motorcycles Neil Fletcher said: ‘Motorcycle Live is a staple on the Honda event calendar and we’re delighted to attend. We’ll arrive in high spirits following our showing at EICMA where we introduced five new middleweight models. The exhibition will provide a great platform for us to remind UK motorcyclists what a fantastic year it’s been for Honda. We’ve bolstered our range with the new Gold Wing, the African Twin Adventure Sports, returning icons in the shape of the Monkey and Super Cub; and we’ve introduced three new models under the Neo Sports banner.’