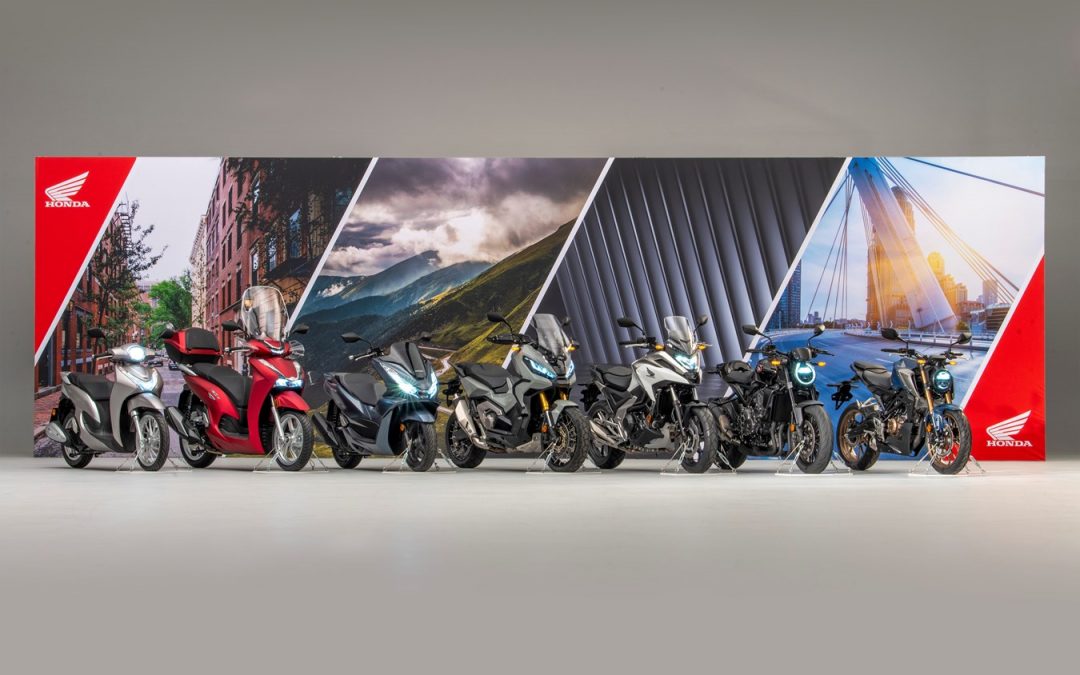 Honda UK has joined the line-up to feature at Motorcycle Live Online (21st – 29th November), where it will showcase its latest 2021 model range. Following, Honda will be celebrating the adventuring spirit by sponsoring the Armchair Adventure Festival with the CRF1100L Africa Twin.

Later this month, in lieu of physical exhibitions, the events’ organisers will be bringing eleven days’ worth of dynamic and engaging content to smartphone and computer screens, on which Honda’s the latest models from the Street, Adventure, Off Road and Scooter model families will appear.

Motorcycle Live Online promises to capture all the hype typically brought by the UK’s annual exhibition. Delivering its part, Honda will show-off no less than 20 new and/or updated models.

There is a top to bottom range update for the Neo Sports Café trio, starting with a makeover for the CB1000R. Visual touches impart a minimalist aesthetic, one well suited to the all-new and brooding Black Edition that mixes extra equipment with an all-black colour scheme.

A new infotainment system is headlined by a new colour TFT instrument display that connects the rider to their smartphone via Honda Smartphone Voice Control System, while a USB charging socket has been installed under the seat. Metal-deep changes see the engine fuelling revised to help achieve Euro-5 compliance.

Similarly, the CB650R’s inline-four has been tweaked to meet the emission standard.  However, the big addition here comes in the shape of Showa’s 41mm Separate Function Big Piston forks. Elsewhere, a USB Type-C socket and an improved LCD dash also feature. These changes are mirrored by the middleweight naked’s, closely-related Super Sport equivalent, the CBR650R.

The CB125R overhaul amounts to a sector-leading specification. An all-new engine delivers the maximum-power permitted for an A1 licence bike and offers a 12% increase in torque over the previous generation. Showa’s ‘Separate Function front fork Big Piston’ (SFF-BP) USD forks appear – never seen before on a 125cc motorcycle.

MSX125 Grom and CB125F return better than ever in 2021. The former strengthens its cult status with retro styling cues and removable body panels that conceal a new, Euro-5 complaint engine that’s mated to a five-speed gearbox, which you’ll be able to monitor via the gear indicator that joins the rev counter in the LCD dash.

eSP engine technology and an 11kg weight-saving combine to make the frugal CB125F even more efficient. Furthering its practical nature is a bright LED headlight, centre stand and ECO meter.

Euro-5 updates have also been applied to the CB500F, CBR500R and Adventure-styled CB500X.

Both models retain the frugal 750cc parallel-twin, however it’s now more responsive and spritelier in feel courtesy of a power bump, shorter gear ratios (1st, 2nd and 3rd) and a higher redline. The throttle-by-wire system and Dual Clutch Transmission allow riders to adjust the character of the bike with three rider modes to choose from. The X-ADV is only available with DCT, whereas a manual option is available to the NC750X.

The above updates, which lower the NC750X’s weight by 6kg, are joined by a new screen, increased central storage space (23 litres) and a 30mm drop in seat height.

A more rugged look for the 2021 X-ADV look bellies its scooter-esque practicality. A new screen, 1.2L glovebox and enlarged under seat-storage, where a USB port can be found, offer commuting credentials. Sealing this adventure scooter’s dual purpose is the introduction of Honda Smartphone Voice Control – allowing riders to use handlebar switches and voice commands to control functions of their Smartphone, including calls, navigation, music and messaging.

Every part of the CRF450R and CRF450RX is new for 2021, save for wheels and engine, with the comprehensive update benefiting directly from knowhow gained by the development of Tim Gajser and HRC’s championship-winning CRF450RW works machine.

The UK’s best-selling PTW, the PCX125 goes from strength to strength, like the models above, benefitting from more power and fuel-efficient technologies in 2021 guise.

2021 pushes the sports/GT Forza scooter brand on to new levels. Crowning it is the new Forza 750, which sits above the new Forza 350 and an upgraded version of the Forza 125. As expected, revisions to the range enhance comfort, performance and practical qualities that mark out Forza models.

As the name suggests, the SH350i replaces the SH300i bringing with it a larger and more powerful engine, delivering gains in both performance and economy. Urban focused mod cons introduced include a USB charging port, keyless start and locking, emergency stop signals and Honda Selectable Torque Control.

Similar updates have been brought to the SH Mode, further emphasised by a lightened frame. A larger floor, USB charging port, increased storage space and keyless start make it the consummate commuter.

Honda UK is delighted to partner with the Armchair Adventure Festival with the headline sponsor being the Africa Twin which has been synonymous for adventure right from the very beginning.

The Armchair Adventure Festival is the world’s only virtual adventure festival and will be streamed live online from 27th – 29th November. It celebrates all forms of adventure through interviews, panel discussions, film screenings and Q&As, and features world famous adventurers, record-breakers, authors, filmmakers, and many more.

The Armchair Adventure Festival the idea of The Sidecar Guys, Matt Bishop and Reece Gilkes and will bring swathes of real-life (and armchair) adventurers together, at a time when global adventure isn’t as accessible as it once was.

To join in, all you have to do is visit www.armchairadventurefestival.com and sign up and free tickets to join will be sent out by email on the day. It’s just like TV – you can see them, but they can’t see you – the only difference is that you can jump on the live chat and quiz the speakers throughout the weekend.

This website uses cookies to improve your experience while you navigate through the website. Out of these, the cookies that are categorized as necessary are stored on your browser as they are essential for the working of basic functionalities of the website. We also use third-party cookies that help us analyze and understand how you use this website. These cookies will be stored in your browser only with your consent. You also have the option to opt-out of these cookies. But opting out of some of these cookies may affect your browsing experience.
Necessary Always Enabled

Any cookies that may not be particularly necessary for the website to function and is used specifically to collect user personal data via analytics, ads, other embedded contents are termed as non-necessary cookies. It is mandatory to procure user consent prior to running these cookies on your website.