Superbike and superstock championship lead for Buildbase Suzuki after brands 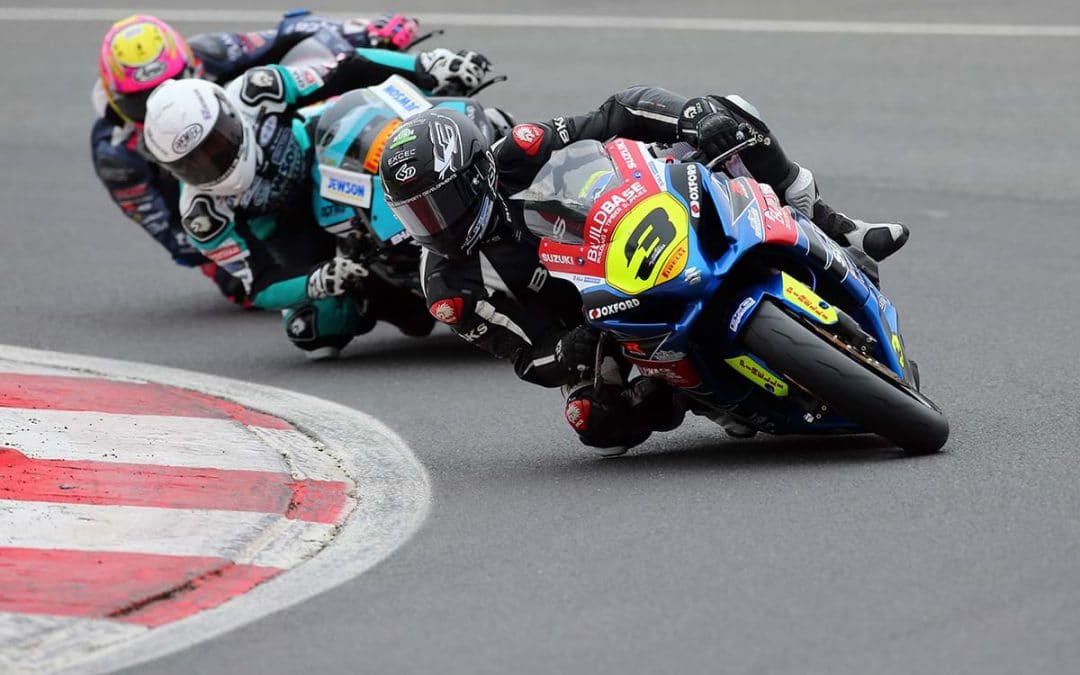 The Buildbase Suzuki team enjoyed more podium success at Brands Hatch for round two of the Bennetts British Superbike Championship, with Bradley Ray second in the opening race after qualifying on pole on his GSX-R1000, while Billy McConnell took a win and a third place in the National Superstock 1000 series.

Despite crashing in both races, Richard Cooper also led his first superbike race of the season.

After dominating the opening round with a double win, Ray headed to his home circuit with the championship lead, and after working meticulously with the team through practice, qualified on pole position for the weekend’s opening race. From there he made a strong start, and led for 28 laps of the 30-lap race. He looked set to maintain his 100% record, but made a mistake into Paddock Hill bend on the penultimate lap, locking the front wheel of his GSX-R1000 under braking. He ran wide, relinquishing the lead, and took the chequered flag in second place. 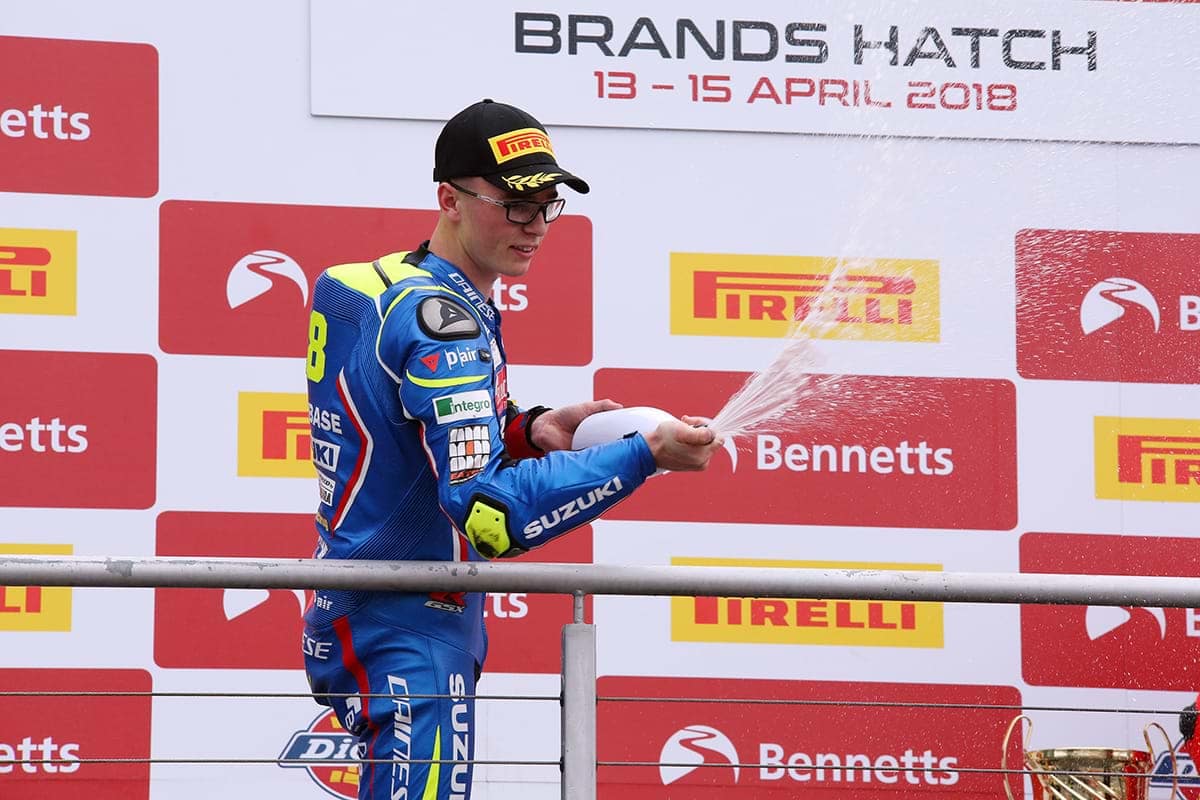 Again starting from pole in race two – after setting the fastest lap of the race and a new lap record in race one – Ray was leading when the race was stopped as the rain arrived. In the restart he took the time to find his feet in the wet conditions. With one eye very much on the championship standings and struggling for rear grip, he kept it safe, crossing the line in seventh place. He now heads the points table with a 10 point advantage.

Ray said, “To come away leading the championship is a big thing. We came into this weekend off the back of a really strong round one and the spotlight was on a little bit, but we know we can’t win everything.

“We had really good pace this weekend, and the pace was there to win race one, I just made a mistake and let Shakey [Byrne] past, and once he came by he had a few bike lengths. I didn’t try to chase, we just took second. In race two we led again and I was feeling good but it rained and we had to go again.

“In the wet the rear was spinning a lot and in those conditions you can go down at any point. Seventh and nine points was good, good for our championship. We just need a bit more time in the wet to develop our setup. We’ll look at the data and try and improve for our next wet session. But in the dry we have a good setting, good pace, and I feel really comfortable on the bike. We’ll go to Oulton with some good points and it’s nice to come away still leading the championship.” 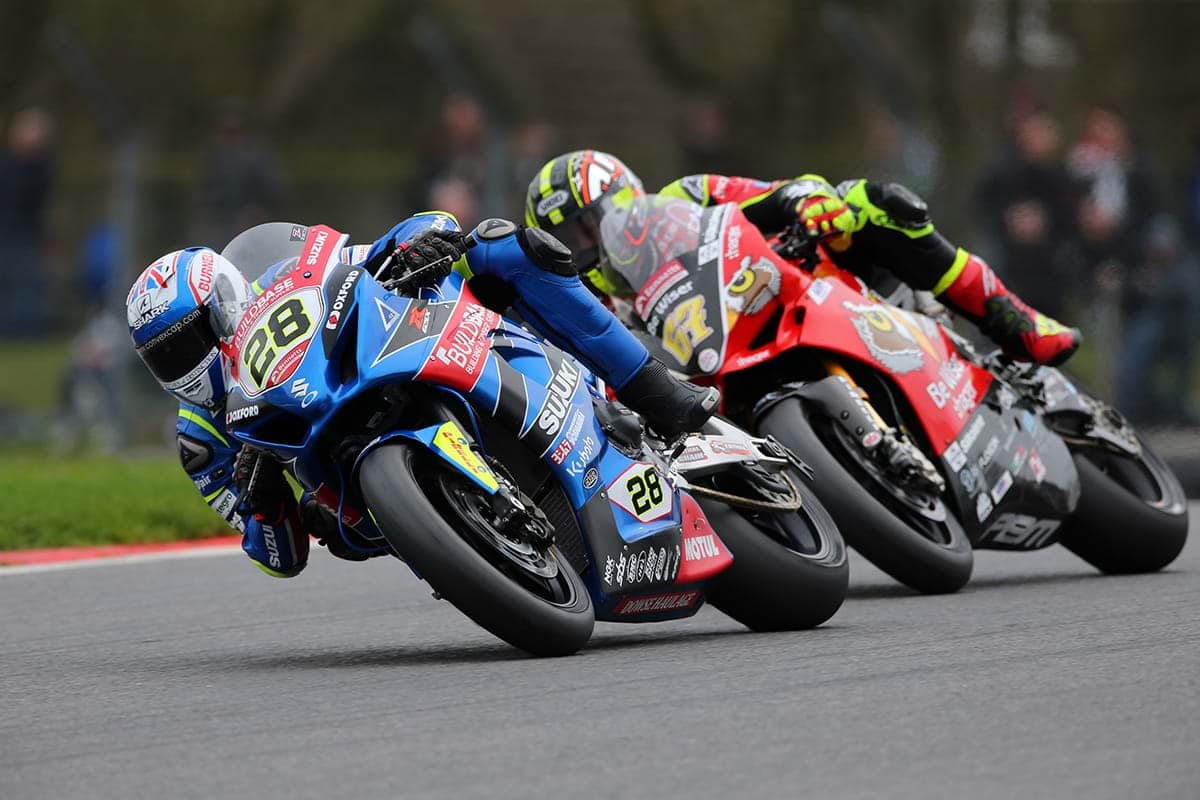 Billy McConnell also qualified on pole position for the weekend’s opening superstock race for the second round in a row, and finished in third place in race one. In race two he pulled away at the front to take a commanding win, retaining the championship lead going into round three.

He said, “It was a brilliant weekend for me, and another good one for the team. We got another pole position, and in race one we finished on the podium in third. In that race I was spinning the rear a little bit. The team actually looked at it on the TV screens and we made some changes to the rear suspension.

“We were back on the pace in warm-up and I wanted to win race two. The bike felt perfect and I pulled out a second lead which is a lot around the Indy circuit and we got the win and still lead the championship. We’ve got a test at Oulton Park next and will try some bits with suspension, but honestly the bike’s so good as it is right now, it might be a case of don’t fix what isn’t broken, keep going as we are and chip away at those championship points.” 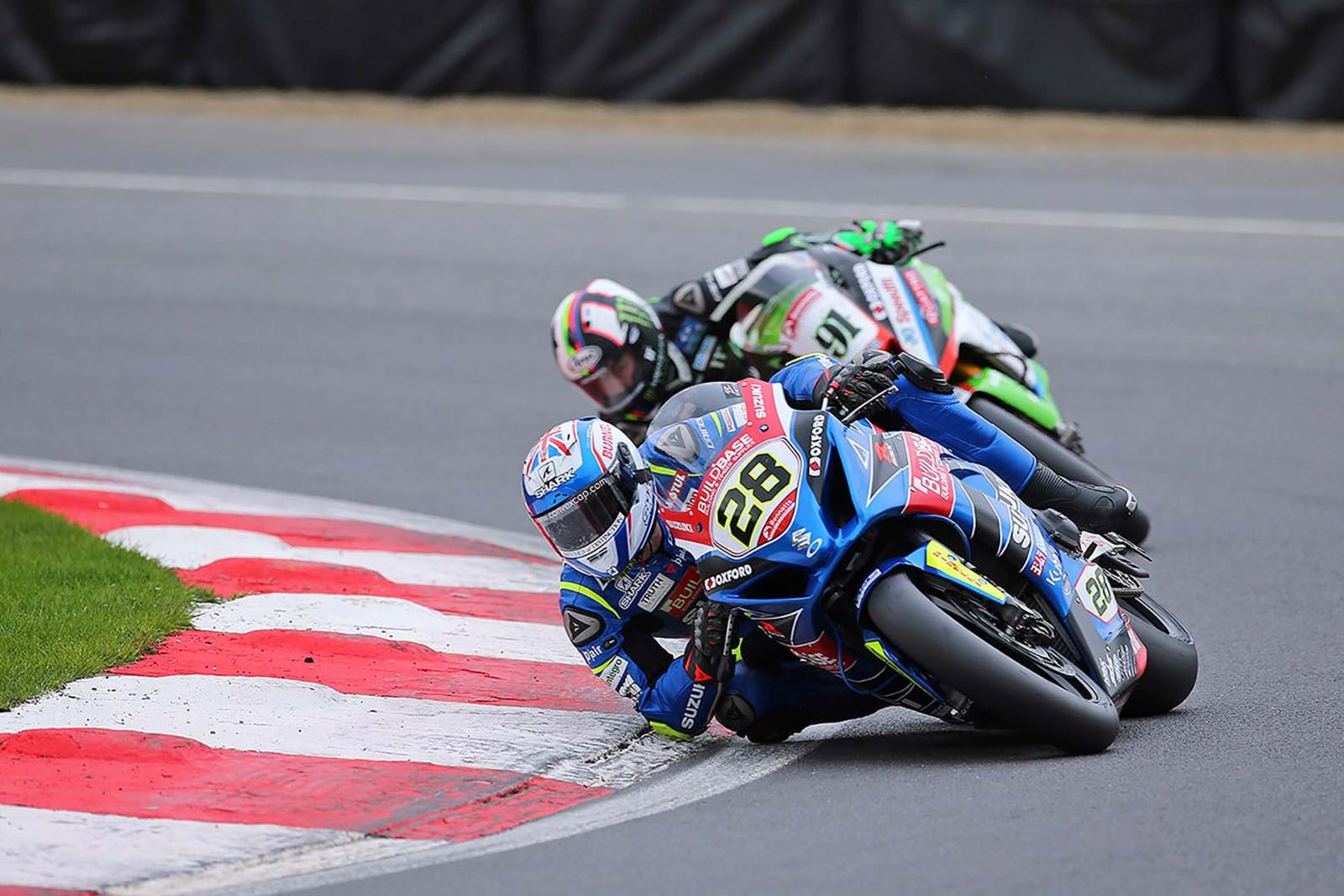 After struggling with chatter at Donington Park Richard Cooper turned a corner with the setup of his GSX-R1000 superbike. Strong showings in practice saw him consistently in and around the top 10. Unfortunately, he crashed while inside the top 10 in race one, losing the front at Graham Hill bend.

In the dry start to race two he pushed forward into the top six, again lapping at a quick and consistent pace, and in the wet restart he battled to the front and led the way before being pushed back to fourth. Losing the rear at Clearways he sadly crashed out, but has plenty to be positive about despite the disappointing results.

Richard Cooper, “Crashing aside I felt good this weekend. Our pace was a lot better; the bike felt completely different to Donington and we were quick all through practice. Sadly no one really watches practice, all they’ll see is that we crashed out of both races. I’m disappointed to be doing that at my age and with my experience.

“In race one our pace was good. The aim was to get a top-10 under our belt and we were in there. Unfortunately I ran in too hot into Graham Hill and the front went. In second race we made a good start, then in the rain I saw an opportunity and managed to lead. It’s a shame because I didn’t really do anything wrong and lost the rear as I opened the throttle.

“The bike works well in the dry, but our setup is probably a bit stiff in the wet. Brad struggled with grip and I’m even lighter than he is. So it’s something we need to work on. But this weekend I’ve been the fastest I’ve ever been around Brands Indy, which shows how much progress we’ve made but also how much the championship’s progressed. It’s still going to show two DNFs sadly, and I’ve got to somehow take the positives. We’re trying just as hard.” 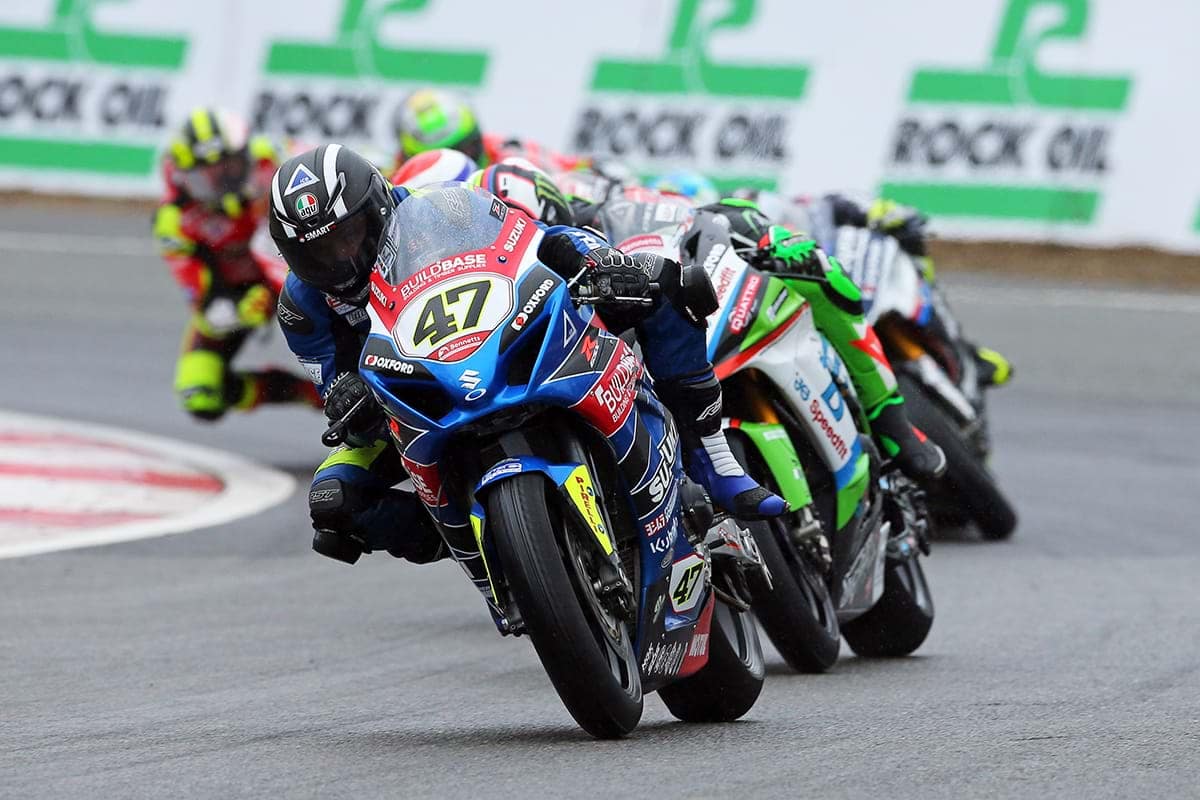 Team manager, Steve Hicken, commented, “It’s been another good weekend. Some disappointments here and there, but we led a load of laps and we’re leading both championships, with more wins and podiums added to the board.

“Brad was unlucky not to win that first superbike race, but two wins and a second from the first three races of the season isn’t bad going. We probably had the pace to win the second one when it started in dry conditions, too, but unfortunately we never got to see how that would have played out. In the wet, we just need to dial in our setup a bit more. Both suffered from a lack of rear grip, so that will be the focus in the next wet session.

“We turned a massive corner with Richard this weekend, too, and two DNFs feel really harsh on everyone. His pace was good in practice and after pretty much starting again with the bike after Donington, a top-10 in race one would have been good. In race two he showed his ability and his experience to get to the front and lead the way, but was just caught out by the rear through Clearways. But it shows how strong we are as a team that both of our riders have led superbike races after just the first two rounds.

“In superstock Billy did another fantastic job. He’s really gelled with the GSX-R1000 and looks really comfortable out there. The third in race one was good, but we noticed something with the rear suspension in the race that probably cost him the pace to win. We rectified it for race two, and to pull over a second around the Indy circuit is impressive, as times are so tight. But we’re heading to Oulton Park leading the championship with confidence and morale in the team very high.”