Brad Ray: what’s it like to be BSB’s latest hotshot? 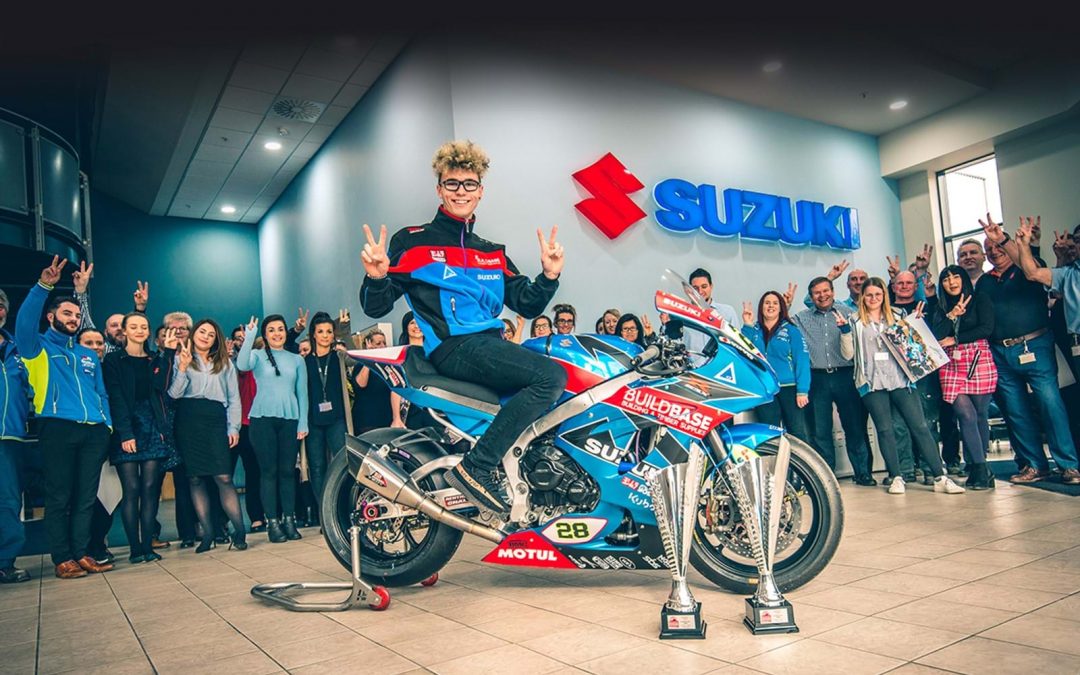 He’s the hottest property in British Superbikes right now. After an impressive debut year with the Buildbase Suzuki team in 2017 – in which he took a podium finish at Oulton Park – Bradley Ray kick-started his 2018 season with a double win onboard his GSX-R1000 at Donington Park for round one. He stopped by Suzuki towers the week after, and we had a chat about the weekend, and his racing in general.

Over the Easter weekend Bradley Ray won both superbike races at the opening round of the 2018 British Superbike Championship, beating the likes of Shane Byrne, Leon Haslam, and James Ellison along the way. And he’s not even 21. Suzuki had been making GSX-Rs for more than a decade before he was born. Hell, he’s not much older than the GSX-R1000, which was first launched in 2001.

The one he was racing over that Easter weekend though, that was brand new. After a year’s worth of British Superbike development at the hands of the Buildbase and Bennetts Suzuki teams, the new spec superbike was wheeled out for the first time at Donington. 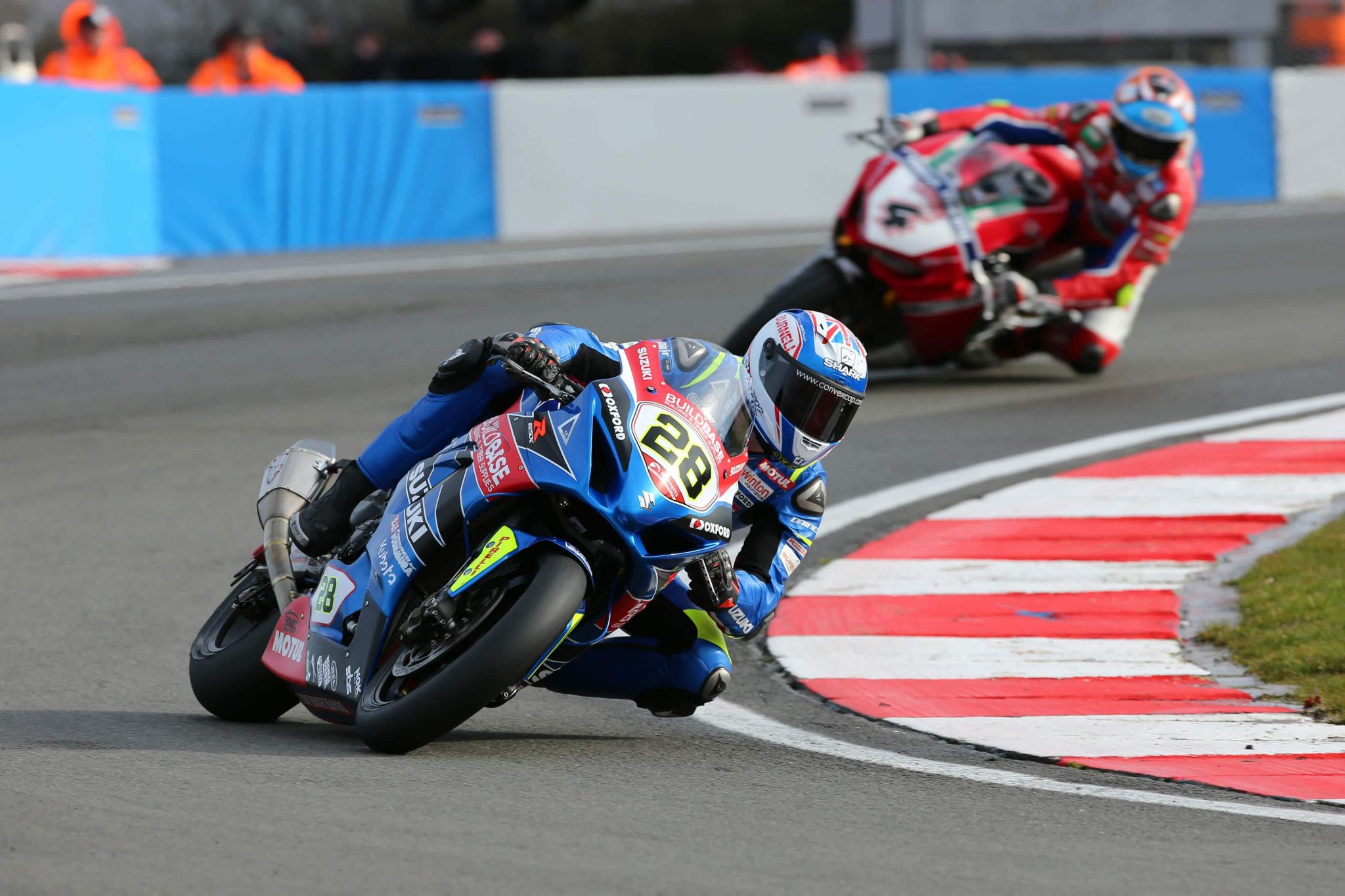 “The team worked really hard over winter to continue the development started in 2017,” Ray explained. “We’ve got a new factory tank, seat unit and subframe, new engine spec, and also new electronics which make the whole package easier to ride. Winter testing was good but it was hampered by the weather a bit. But we still went into round one feeling confident.”

Feeling confident is one thing, going out and winning two races, in tricky, tricky conditions as a relative class rookie, is another.

“The bike was working brilliantly,” he continued. “I felt really comfortable all weekend. In qualifying we set a good time and was on the provisional front row until the last few minutes, and got bumped back to seventh. But I was still happy.” 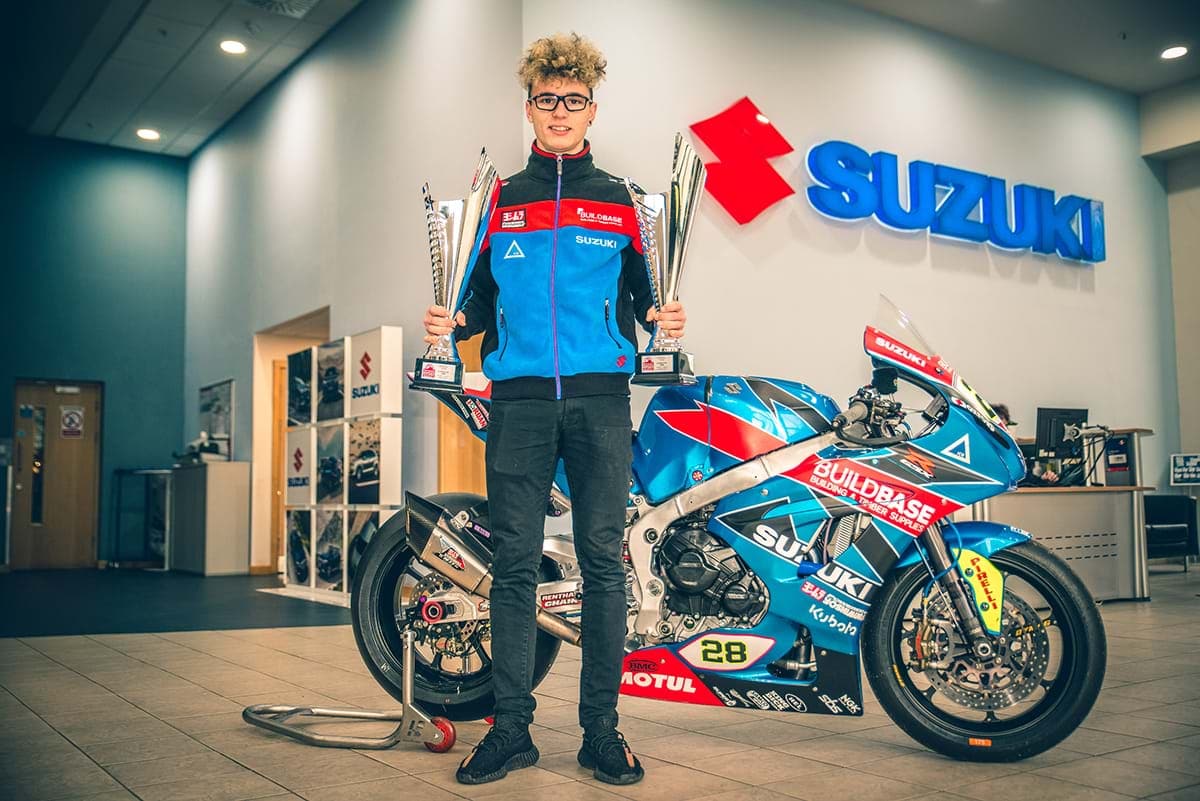 It’s been a pretty meteoric rise for Ray. Starting on a minimoto at the age of four, he was racing at six, before graduating onto Metrakits, 125s, and eventually the Red Bull Rookies. Back in the UK, once he got to grips with a bigger, heavier, multi-cylinder four-stroke, he was unstoppable in the Supersport class, and after just one season he made the step into the Superbike class with the Buildbase Suzuki team in 2017.

“I didn’t ride a litre bike until February last year,” the 20-year-old recalled when we asked him about it. “I’d never even ridden a road bike. We had a shakedown at Mallory and that was the first time, then we went to Spain. It was a good year. I was just learning all the time.

“That year, while the team developed the bike, my bike developed as well. I started with a lot of standard parts, which was good for me too. Then, when I got to the limit of what I had, we added more, and kept building and learning. And we got a podium out of it at Oulton Park.” 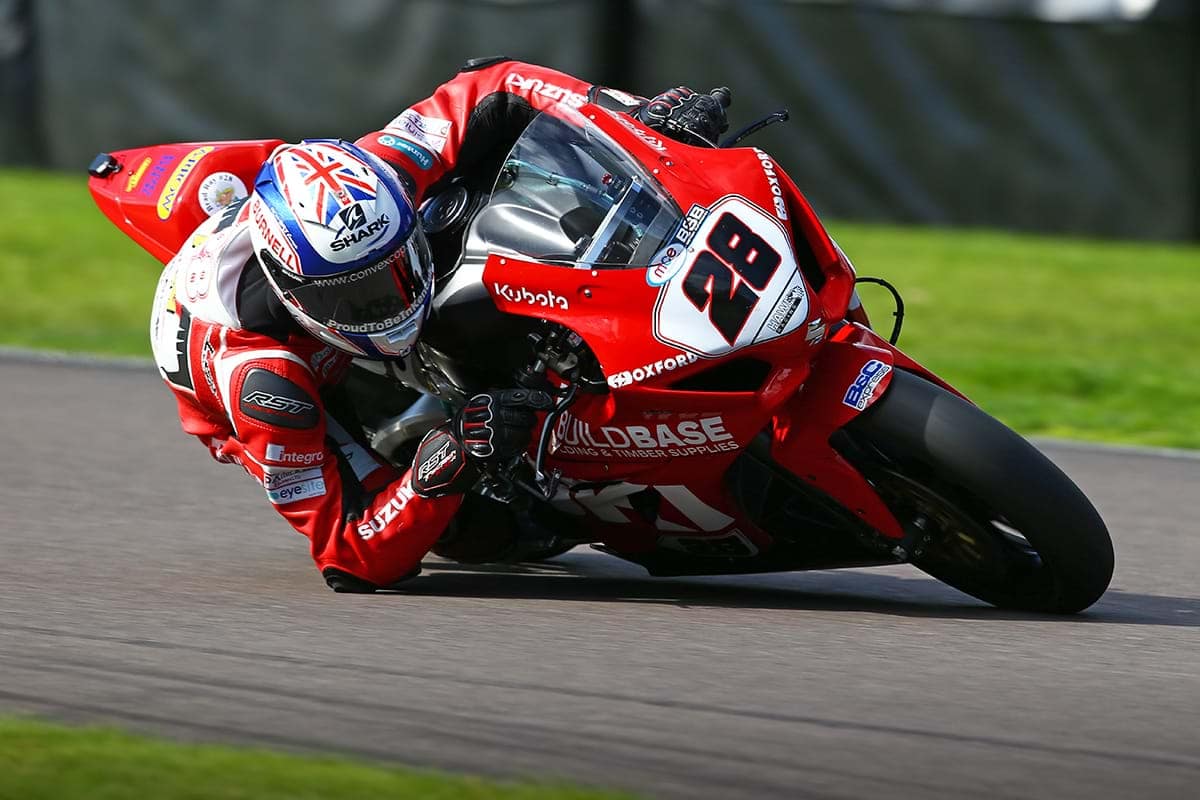 Ray’s superbike debut came after a career on smaller bikes, with many years on 125s and Moto3 machines. Jumping onto the bigger machine takes much learning, something Ray admits he’s doing, still.

“The speed is obviously a lot different, from the smaller bike and even supersport, to the superbike. But that’s not the hardest thing to get used to. Once you’re used to going faster and arriving at corners quicker, you’re used to it.

“I’m still trying to adapt my riding style mid-corner. I’m still carrying too much corner speed, so that’s where I’m working the most. You also have to get used to the electronics a lot more, too.”

Fast forward to the opening round of 2018 and Ray is seventh on the grid for race one, which is about to get underway in cold conditions. Lights out and he bolts, slotting into third place. And it’s not long before he passes Leon Haslam and James Ellison for the lead. 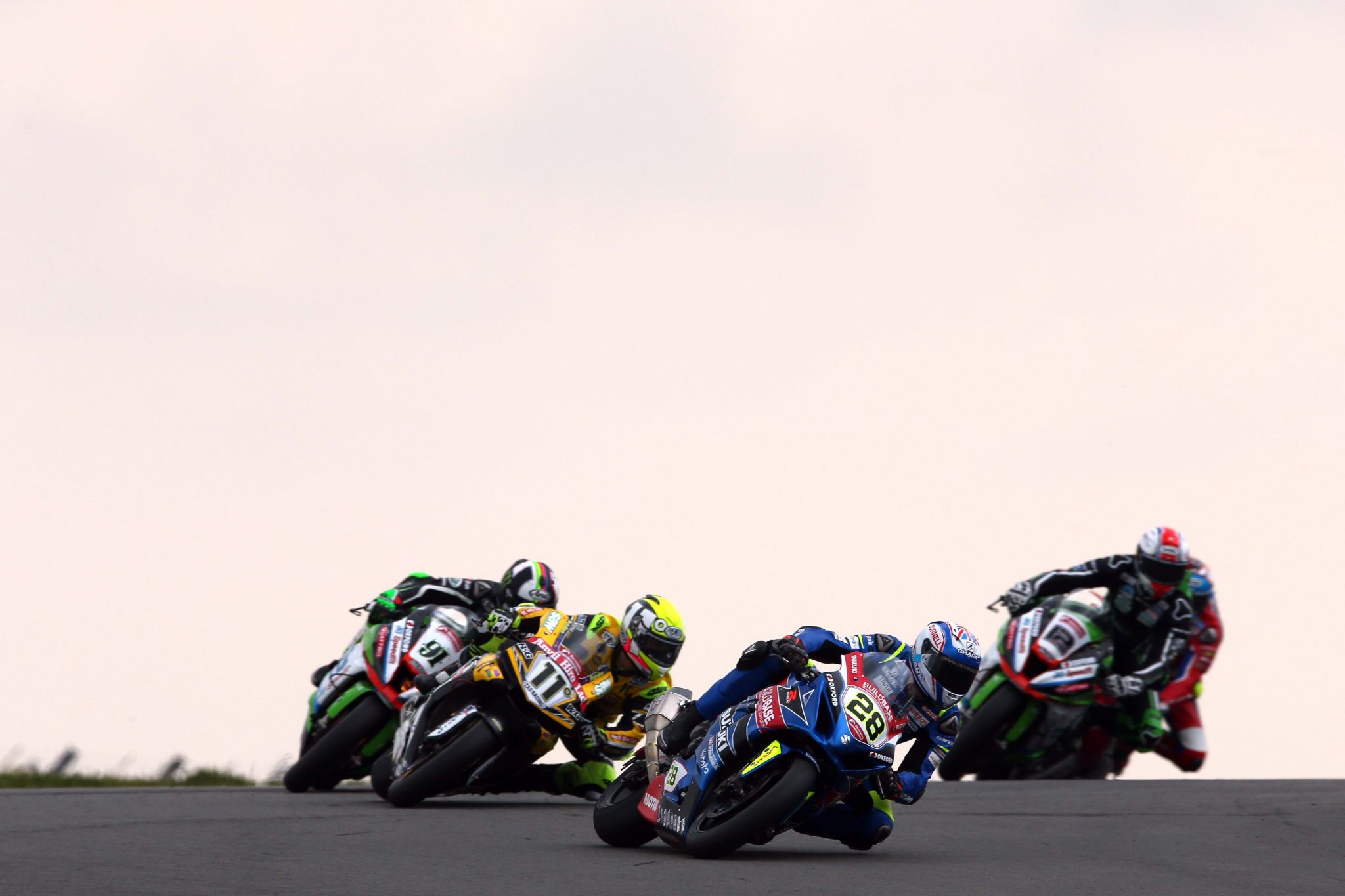 “I just felt comfortable,” he said, when we asked him what it was like to make a move and lead a BSB race for the first time. “I felt like I could run a good pace and pull a gap. Like I said, I was confident in our pace from the off, and the package we had. I’d be lying if I said I expected us to win first time out this season, but it wasn’t a surprise to be at the front.”

Leading a BSB race for the first time is one thing. Leading a last lap for the first, one and a half minutes away from your first win, is something else.

“I was flapping.” Ray admitted. “I started the penultimate lap with over a second lead, but starting the last lap I saw +0 on my board and knew they’d caught me up. I just thought, if I could not make any mistakes and hold them off into the Esses, it’d be alright.

“Then, coming out the Esses I had a moment and fully expected a move into the Melbourne Loop. But it didn’t come and obviously we got the win.” 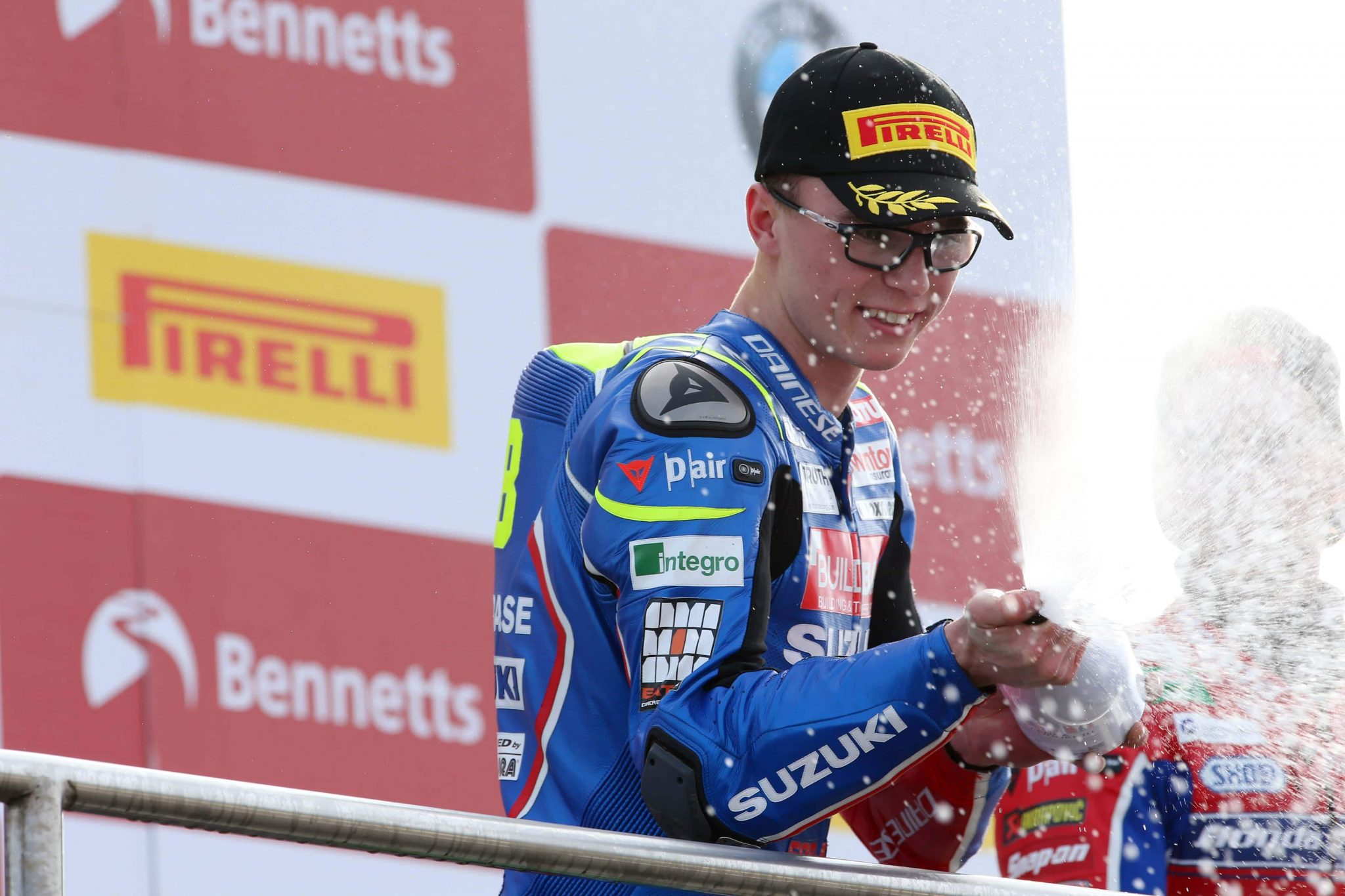 As if one wasn’t enough, Ray went out in race two and raced his Buildbase Suzuki GSX-R1000 to a commanding win. Negotiating damp patches on lap one he pulled out a lead of nearly three seconds. In one lap. From there, he managed it, responding to anyone that dared chase him down to take win number two.

There’s plenty of racing left to go, mind, and no one is getting carried away. But what does this show the rest of the field?

“I think it shows that we can be competitive, in all conditions, and that the first win wasn’t a fluke. We have the pace to fight at the front this season. We won’t win every race, and if there’s a weekend where the best we can get is fifth, we’ll take a fifth and move on and try and work on the areas we struggled.

“The aim is the Showdown, it’s got to be. But at the same time I’m not thinking about anything other than the next round, the next round. We’ll go one weekend at a time and see where we are, nine rounds in.”