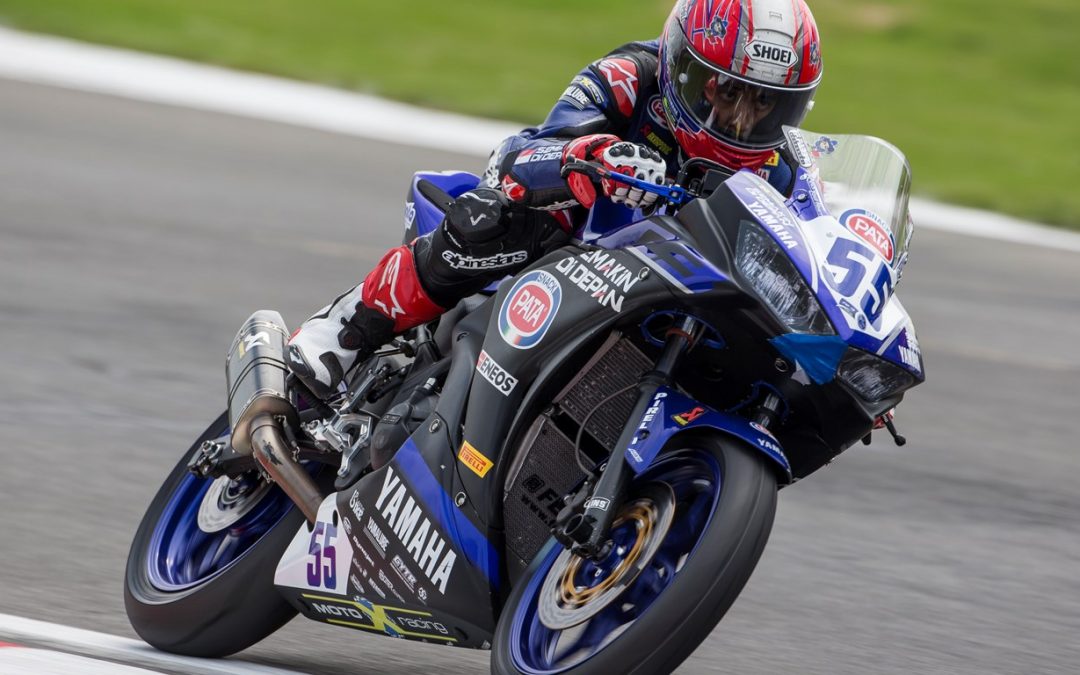 The Yamaha R3 bLU cRU Challenge riders ready to return to action at Round 5 of the 2018 FIM Supersport 300 World Championship at Brno this weekend.

Galang Hendra Pratama (Yamaha Pata | Semakin di Depan | Biblion Motoxracing Team) backed up his stunning ride to fifth in Imola by recording his second top-ten finish of the season at Donington Park after crossing the line in ninth. Consistently the fastest Yamaha rider on track in 2018, the 19-year-old Indonesian rookie is now looking forward to riding at Brno as, for the first time this season, it will be a level playing for Galang as most of the other riders will have to learn the circuit too.

Luca Bernardi (Yamaha Pata | Trasimeno Team) is fast establishing himself a name as someone that comes good on Sunday after two spectacular rides at the last two rounds. Making up 27 places on his charge from 39th on the grid to 12th in Imola and then storming from 28th to cross the line in 14th in Donington Park. The 16-year-old Italian is now aiming to improve his qualifying performance to leave him with less ground to make up during the race.

The first bLU cRU points scorer in 2018 was 21-year-old Dutch rider Dennis Koopman (Yamaha Pata | Semakin di Depan | GRT Team) after he secured 15th at his home round in Assen. Two more points followed in Imola after he crossed the line in 14th but he just missed out at Donington Park after finishing in 19th and Koopman will be looking to return to the points in Brno.

16-year-old French rider Hugo de Cancellis (Yamaha Pata | Toth – YART Team) was 21st across the line at Donington Park as he continues to impress, following on from top-20 finishes at the previous two rounds. Having just missed out on his first championship point at Assen by just 0.238s, he is now determined to finish in the top 15 at Brno.

The Automotodrom Brno welcomes back WorldSBK in 2018 after a six-year hiatus. The tradition of motorcycle racing in Brno dates back to 1930 on the so-called ‘City Circuit’. The first Czechoslovakian Grand Prix was held in 1965 when the 500cc class raced over thirteen laps of the original 13.94 km street circuit. The current circuit was first used for GP racing in 1987 and is popular with both fans and riders alike, with the new track built in a natural bowl which is banked in places to offer spectators an excellent view. Brno constantly changes in elevation as it sweeps across forested hillsides and its fast undulating corners test rider talent and engineering to the limit. The track itself is 5.403km long with 14 corners, eight right and six left-handed, with a number of short straights (maximum 637m) that have been known to provide spectacular overtaking opportunities and racing in the past.

The Yamaha R3 bLU cRU Challenge riders are in action in Brno on Friday morning at 11:45 am local time for Free Practice 1.

“Another new and fantastic circuit awaits our bLU cRU boys, nobody has been there before but they study a lot the track layout on video and have already started to think about their strategies in order to qualify in the best position possible. It’s fundamental to try and start from as near to the front row as possible to allow the guys to take advantage of the slipstream to fight in the leading group. The FIM has introduced a new technical regulation for this round, balancing the overall weight of the bike and rider to ensure a more level playing field in this unique class. The bLU cRU guys are young and strong, plus while they may have the smallest capacity bike on the grid but the YZF-R3 is known for its superb handling, something that is crucial at Brno, and we look forward to them staring the weekend in the most positive way possible!”