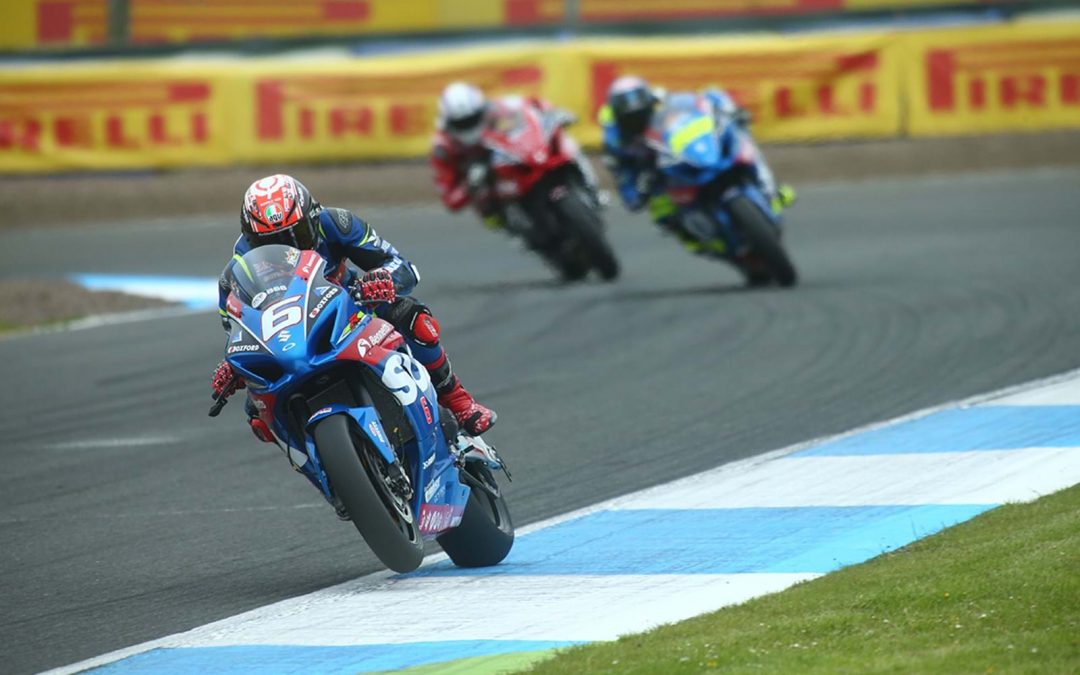 Taylor Mackenzie marked the return of the MCE British Superbike championship after a seven week break with a fifth placed finish at Knockhill, onboard his Bennetts Suzuki GSX-R1000.

Mackenzie started the weekend with his best ever qualifying the Superbike class, starting the opening race from the third row of the grid. After the lights went out he picked his way forward until he was in the battle for the podium, and despite dropping back in the closing stages, he took a career-best finish of fifth.

In race two Mackenzie was again racing well inside the top-10, but eventually crossed the line in 11th place, after struggling with physical fitness after his surgery. 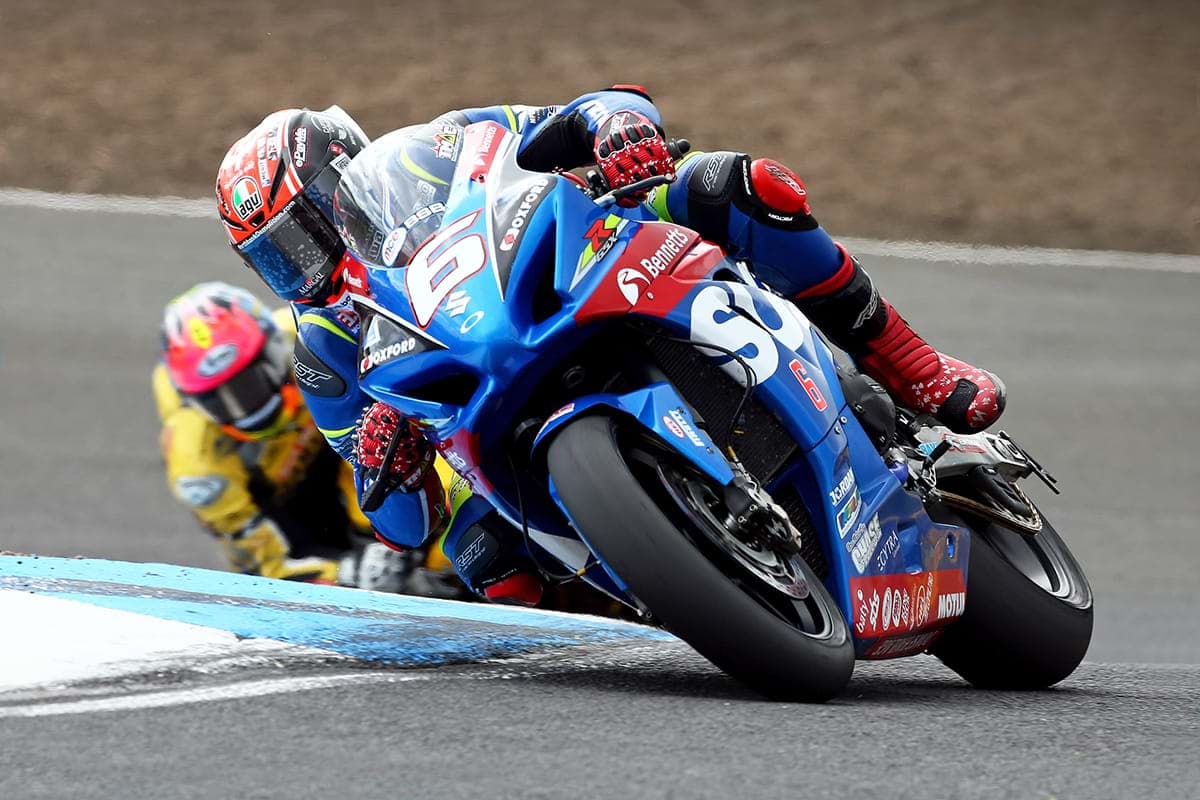 Taylor Mackenzie, “I would have taken fifth all day to be honest, but we were in that battle for the podium. There were areas I was making up time, but I missed a gear coming out of the hairpin and they just broke the tow. I didn’t want to push and risk a crash, so I settled for that fifth.

“It’s more than we could have asked for and shows how far we’ve come on. In race two, after four or five laps, it was just survival really. I haven’t ridden in so long and after the surgery I couldn’t do any strength training, and I was just really struggling. Not with arm-pump, just strength. But I’m going away happy – we’ve made lots of changes and the bike’s better, I’m better. I’ll try and get out and get some laps in before Snetterton, just time on the bike. I saw this as the start of my season and it’s a good place to be starting from.”

Sylvain Guintoli was racing at Knockhill for the first time in his career this weekend, and also started from the third row of the grid. He took an eight placed finish in race one, but was prevented from improving on that performance in race two after being forced wide and off track at turn one on the opening lap.

He rejoined dead last, but picked his way through the field to take two championship points in 14th. 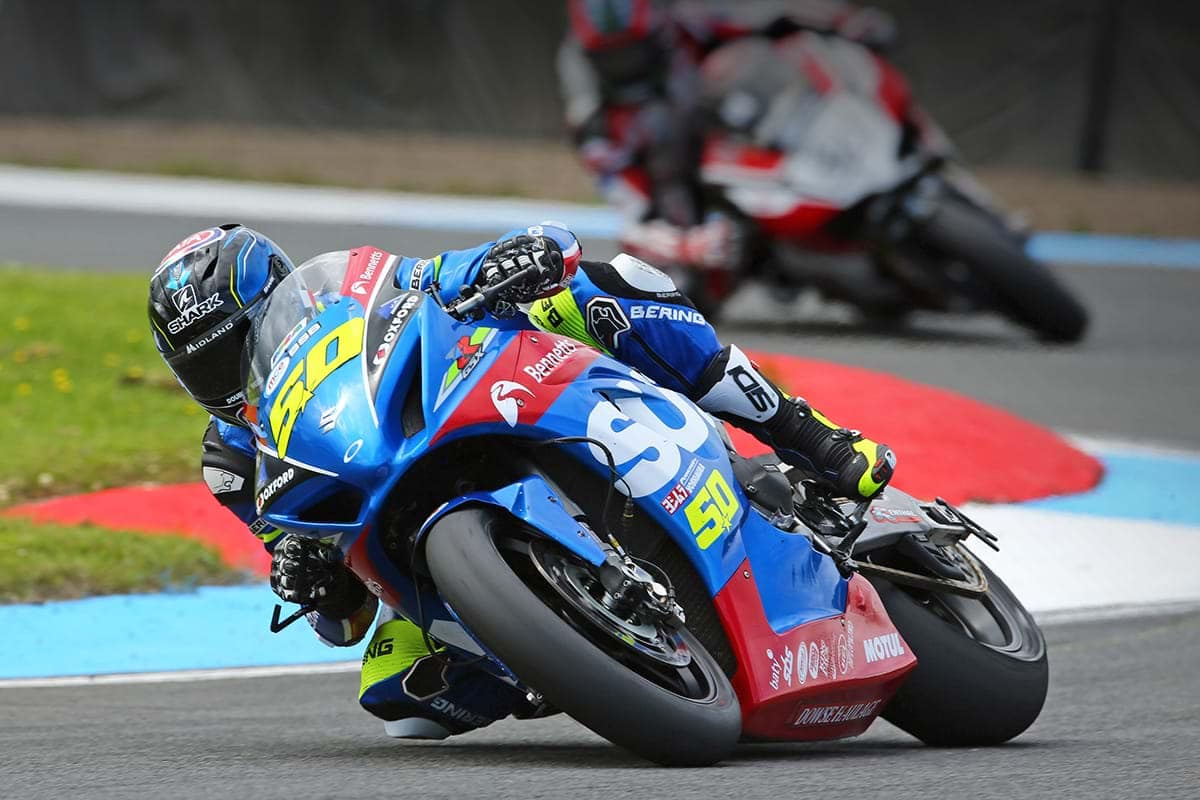 Sylvain Guintoli, “We didn’t get the results we wanted this weekend but we’re definitely looking at all of the positives. Our pace was good in qualifying and it was our best of the season. We still have areas to improve, and we struggled with rear grip in the first race. Our pace was actually good in the second race but I got forced off the track and it made it hard to make up the time, as our pace was similar to the top-10. It was hard to bridge the gap.

“We’ll keep working for Snetterton; it’s another new track for me on a bike, although I did race there and finish on the podium in a car race in a Suzuki-engined Radical SR3, so I know the layout, and hopefully I will get up to speed quickly on the GSX-R.”

Richard Cooper finished on the podium in the second Superstock 1000 race, his third place finish helping put the disappointment of a retirement in race one behind him, when a loose bolt came loose and caused the bike to become stuck in sixth gear.

Cooper started strongly in race one before a mistake on lap one dropped him back down the order. He recovered to fourth place and was in the fight for the podium before retiring three laps from the end. In the second race he kept his championship challenge on track, taking third at the chequered flag. 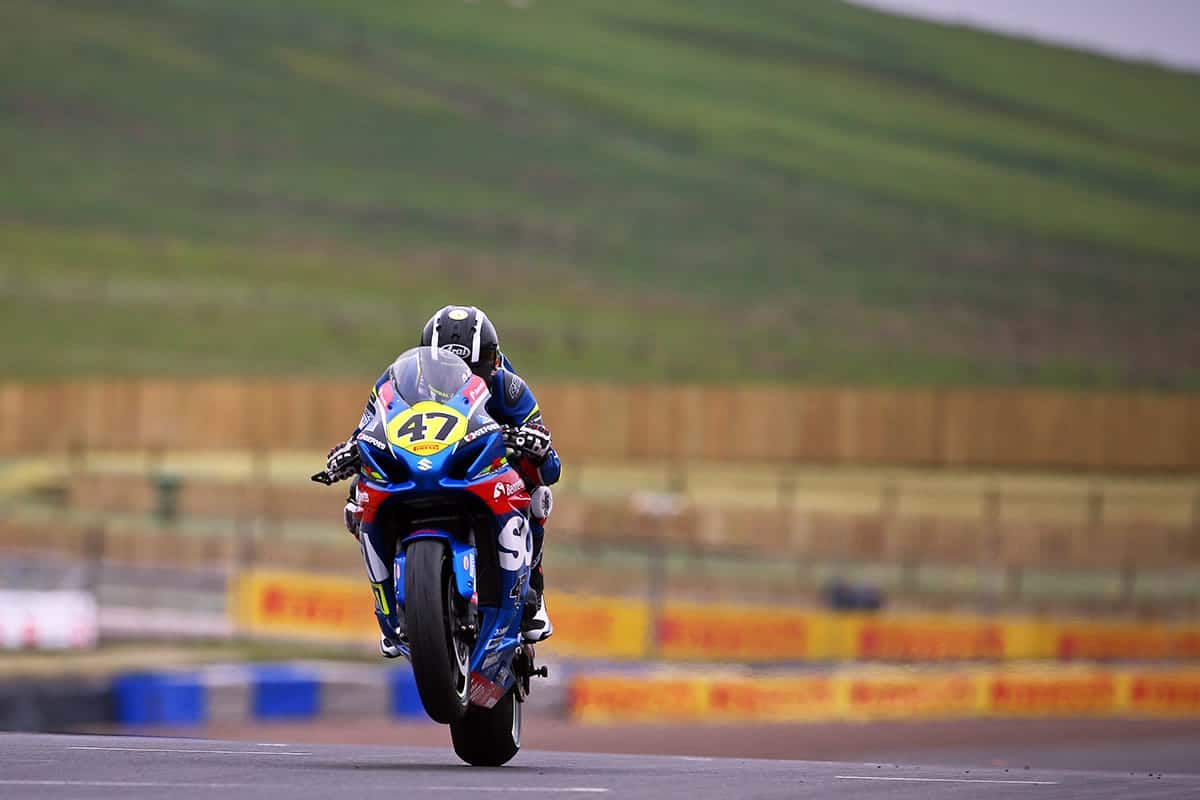 Richard Cooper, “It was disappointing not to finish the first race. We didn’t qualify brilliantly but I made a good start, but then I made a mistake into the hairpin on the opening lap and that cost me a lot of time and a lot of places. I was back in the battle for the podium but three laps to go I couldn’t get out of sixth. It was a silly little problem really, but we found it, fixed it, and got out again and had a good race in race two. We didn’t quite have the pace for the win, but it’s another podium and we’re still in the championship hunt.”

Steve Hicken, team manager, “It’s definitely been a better weekend for us. We’ve got the bike in a much better place, and a lot of that is down the Michael [Dunlop] and the TT; a lot of the settings we worked on with him we started with this weekend. It’s been a brilliant weekend for Taylor, with a best ever qualifying and best ever result. To be passing people like Shakey [Shane Byrne] and Josh Brookes like he did, on the brakes, looking completely in control, shows how far the bike’s come and how he’s developing as a rider. In race two he just struggled with fatigue with his arms – not arm-pump, but it took it out of him. But with more time on the bike that’ll sort, and his confidence will be high now and hopefully we can carry that forward.

“With Sylvain, we honestly thought we were going to be fighting for the podium today, given his pace in qualifying and his long runs in practice, especially when you consider he was still learning the circuit. He just struggled with grip to match the group in front for pace in race one, potentially down to the change in track temperature. And race two was lost on the opening lap when he was forced off circuit. But we’ll look at the positives and look at the pace he had, and continue to work with him and the bike to keep improving.

“It was a shame to have to retire with Cooper in the first Superstock race, we didn’t quite have the pace to run at the very front this weekend but we were still on for a podium. We got it in race two, coming back fighting. We’ll take this weekend on the chin and move on from here.”